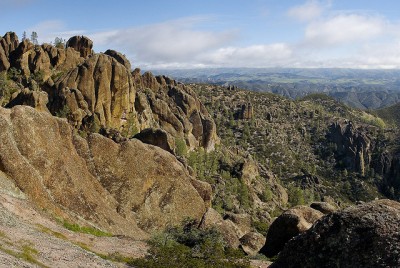 The Pinnacles National Monument, the eleventh oldest national monument in the United States, is just one step away from becoming elevated to national park status. A rare Sunday lame-duck session of the United States Senate passed Congressman Sam Farr’s (D-Carmel) bill to establish Pinnacles National Park in California. The House approved it in July. It awaits one more signature, the president’s, and Obama is expected to sign.

The park would be the 59th national park in the system created by Congress and the first since 2004. Pinnacles was originally established by Teddy Roosevelt in 1908 during a seven-day period when he set aside Muir Woods and the Grand Canyon as national monuments as well.

Located in central California, about 50 miles southeast of Santa Cruz, the name “Pinnacles” comes from “rock spires and crags that are remnants of an ancient volcano,” according to the National Park Service.  “The volcano [Neenach] eroded over millions of years as it moved northward along the San Andreas Fault. Rock debris in the form of boulders has weathered and settled, leaving behind spires of volcanic rock and talus caves.”

“The Pinnacles system is home to 149 species of birds, 49 mammals, 22 reptiles, six amphibians, 68 butterflies, 36 dragonflies and damselflies, nearly 400 bees and many thousands of other invertebrates,” according to a press release from Congressman Farr.

“The Pinnacles is a special place and I am proud to have worked with Senator Boxer to elevate it to a National Park,” said Congressman Farr. “Often referred to as the missing novel in our National Park’s library, this treasure will finally take its rightful place on the shelf next to Yosemite, Yellowstone and all of our other wonderful parks. Today is a great day not just for California but for all Americans, who will want to now come visit this geological and ecological wonder.”

Elevation of the monument to park status will likely have a positive effect on tourism to the area. The surrounding communities were big supporters of the bill. The legislation also renames the Pinnacles Wilderness area within the monument to the Hain Wilderness after Schuler Hain, a conservationist who led efforts to establish the monument in 1908.

Image from Miguel Vieira (MiguelVieira) on the flickr Creative Commons