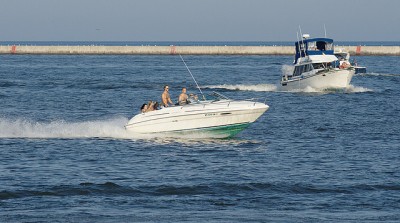 The U.S. recreational boating industry began to see the tide turn for new power boat sales with an estimated ten percent increase in 2012, according to the National Marine Manufacturers Association (NMMA). Early projections indicate the industry will see additional increases in 2013 by as much as 5-10 percent. This level of growth in 2013 will depend on a number of factors including continued improvement in economic conditions that impact recreational boating—namely consumer confidence and the housing market—and sustained increases in Americans’ participation in outdoor recreation.

“Improving economic conditions and what seems to be a resurgence in Americans’ love for the outdoors, helped fuel steady growth in new power boat sales in 2012,” notes Thom Dammrich, president of NMMA. “A ten percent boost at retail in 2012 is significant as this is the first time since the recession we saw healthy growth across the powerboat market, which will create momentum in 2013.”

Another factor, and new trend, that’s contributing to new boat sales is the creation of innovative, more versatile and accessible boats that appeal to a variety of interests and budgets and fall within the 15-26 foot range.

It’s these smaller boats, those less than 27 feet, which make up 96 percent of the 12.4 million registered boats in the U.S. and are leading the industry out of the recession. Boats that fall into this category include aluminum all-purpose boats and pontoons, fiberglass bowriders, fish and ski boats, and jet boats.

“One of the most significant trends we’re seeing in boat manufacturing is the versatile boat—one that can pull tubers or wakeboarders, can be used for fishing outings, relaxing with family or entertaining friends,” said Dammrich. “After a decade of decline, Americans are participating in outdoor recreation in growing numbers, and as they look for ways to spend time outdoors, boat manufacturers are taking cue, producing innovative boats that offer an all-encompassing entry to the boating lifestyle at a variety of price points.”

It’s not just boating participation that is growing. The Outdoor Industry Association reports that more than 140 million Americans make outdoor recreation a priority in their daily lives – and they prove it with their wallets. The outdoor recreation economy generates $646 billion in direct consumer spending annually. What’s more, a recent study by the U.S. Fish & Wildlife Service reports that participation in fishing is up eleven percent in the past five years, and hunting participation is up nine percent in the past five years.

To further attract this growing number of outdoor recreation enthusiasts and showcase what the boating lifestyle has to offer, the recreational boating industry will unveil its latest innovations at annual boat shows across the country in January and February, starting today, January 3, with the Progressive Insurance New York Boat Show. Boat shows, which attract more than one million people annually, are where manufacturers launch new boats and marine gear for purchase, unlike auto shows which are for viewing. The shows are a primary sales venue for the industry and barometer for things to come for recreational boating, as they provide a glimpse of buyer sentiment and sales for the year ahead. A complete list of boat shows around the U.S. can be found at boatshows.com.