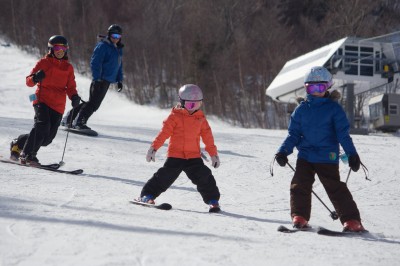 Become a skier or snowboarder during January’s Learn to Ski and Snowboard Month.

There’s no excuse not to learn to ski or snowboard next month.

That’s because ski areas across the country are trying to generate a new wave of skiers and snowboarders by offering discounted and free learning packages in January.

The first month of the year is Learn to Ski and Snowboard Month. According to organizers Snowsports Industries Amercia, some 100,000 children and adults took part last season.

“These programs are a chance to get your kids outdoors during the winter months and spend quality time with them,” said Ski New Hampshire’s marketing director Karl Stone. “It provides an ideal opportunity to try something new with your family at a price that anyone can afford.”

“The goal for us, is to provide affordable options for newcomers to try these sports, by increasing the accessibility of lessons and stressing their importance during the month of January,” Beech Mountain Marketing Director Talia Freeman said.  “We hope to increase participation and improve the overall health and fitness of our fellow citizens.”

In addition to the physical health benefits, skiing and snowboarding promote mental wellness during the winter months, by keeping people active, according to Freeman.

According to the National Ski Areas Association, around 4 percent of Americans ski or snowboard.

Freeman believes the low number of winter-sport participants is often attributed to the perceived high cost of the sport, combined with the intimidation of trying something new and different.

“These programs give people a chance to see why so many people love to ski and ride during those months,” he said.

It’s best to register as soon as possible for the programs. Find out about all the specials and who is offering them at www.skiandsnowboardmonth.org.

Don’t want to come alone? Already know how to ski?  Then bring a friend. Be entered to win prizes by participating in the nationwide Bring a Friend program. That web site is www.bringafriend.org.