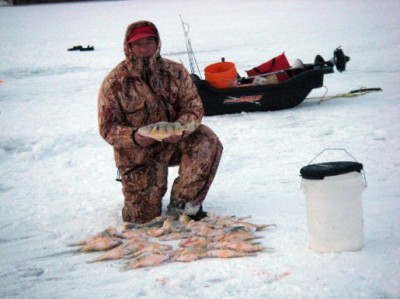 You have warm clothes and waterproof boots.  Your ice fishing equipment is ready to go.  And you have a basic idea of how to locate fish and catch them through the ice.

So what’s standing between you and a great ice fishing experience this winter?

Maybe only one thing: Knowing which waters in Utah to fish.

“In my opinion, Utah has some of the best ice fishing in the country,” says Drew Cushing, warm water sport fisheries coordinator for the Division of Wildlife Resources.

Cushing has fished through the ice in states across the country.

“Utah provides a wider variety of quality fish to catch than any place I know of,” he says.  “And many of these opportunities are probably close to your home.”

Cushing gave Utah County as an example.  If you live in the county, you can fish for white bass at Utah Lake in the morning, and then turn around and head to Strawberry Reservoir to catch trophy-sized cutthroat trout in the afternoon; all in the same day!

Visiting the DWR’s fishing report is one way to learn which type of fish are in which waters and where fishing is the best.

DWR biologists, officers and outreach personnel update the report every one to two weeks.  You can read the report at www.wildlife.utah.gov/hotspots.

Other Internet sources—such as utahwildlife.net and bigfishtackle.com—are also good places to visit.  And don’t forget your local fishing tackle shop or sporting goods store—people who work at these stores are often the first ones to know about good fishing in their areas.

“Catching perch at Pineview can be fairly easy,” Cushing says. “Just locate the spot on the bottom where the perch are, and then put your bait in front of the fish.”

“Strawberry provides fantastic fishing for big trout, and lots of them,” Cushing says.

“Both of these waters provide good fishing for big tiger trout,” Cushing says.

“You have a good chance to catch some big fish at these waters,” he says.

Cushing says crappie can be tricky to catch. “They suspend at various depths,” he says, “so they can be tough to find.

“But if you catch a crappie at a certain depth, keep fishing that depth,” he says, “and you should do well. Pineview has a good population of crappie.”

Cushing says the best ice fishing for kokanee salmon happens at the two waters at the start of the ice fishing season. “When ice first forms on these waters,” he says, “salmon fishing can be fantastic for about two to three weeks.”

This is another water where the best fishing happens early in the ice fishing season. “Fishing for white bass is usually best from the time the ice forms until about mid January,” Cushing says. “The harbors at the lake are the best places to catch them through the ice.”

Some of the best fishing of the year

Cushing says the arrival of winter doesn’t mean fishing is over until the spring. “Winter can be the most fun and productive, and the least expensive time of the year to fish,” he says. “New lakes, new opportunities and new species of fish are out there for you to enjoy. Get out there, and take advantage of it.”