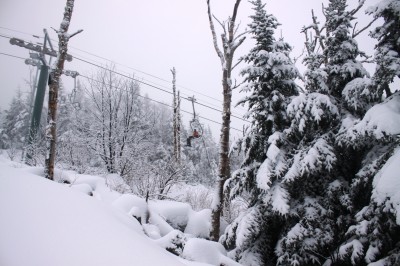 As of noon Wednesday, December 19, it has been snowing at Wildcat Mountain since a cycle of storms began early Monday and accumulations have now totaled 2 feet at its summit. Benefitting from its higher elevations, in the last 24 hours an additional 11 inches has fallen at Wildcat Mountain and the steady snowfall over the last 56 hours has contributed to the 24” seen at the upper elevations of Wildcat. Wildcat Mountain Ski Patrol lowered the ropes on Upper Wildcat yesterday and today also opened Upper Lynx, Cat Cutoff and Lower Cat Track adding to the top-to-bottom 2,112 vertical feet of skiing and riding that was available prior to the natural snowfall began. For Friday Wildcat Mountain plans to open the Snow Cat lift and have beginner and novice terrain available. Snowmaking will resume Friday night in addition to the favorable forecast calling for additional snow this week.