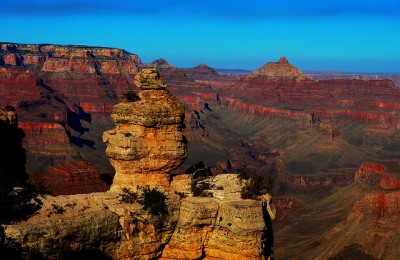 For decades, scientists have placed the age of the Grand Canyon between five and six million years old, but new research by scientists at the University of Colorado-Boulder and the California Institue of Technology suggests it’s more like 65 million to 70 million years old. At that age, it would mean that dinosaurs likely roamed the area of the canyon and may have even glanced over its cliffs.

The canyon could have existed in its current form for five million years before dinosaurs went extinct. CU-Boulder Assistant Professor Rebecca Flowers was the lead author of the study published in the journal Science on November 29. She and her team analyzed mineral grains from the bottom of the western Grand Canyon. They used a dating method that “exploits the radioactive decay of uranium and thorium atoms to helium atoms in a phosphate mineral known as apatite,” according to a CU-Boulder news release.

The helium atoms were locked in the mineral grains as they cooled and moved closer to the surface during the carving of the Grand Canyon, she said. Temperature variations at shallow levels beneath the Earth’s surface are influenced by topography, and the thermal history recorded by the apatite grains allowed the team to infer how much time had passed since there was significant natural excavation of the Grand Canyon, Flowers said.

“Our research implies that the Grand Canyon was directly carved to within a few hundred meters of its modern depth by about 70 million years ago,” said Flowers. A paper on the subject by Flowers and Professor Kenneth Farley of the California Institute of Technology was published online Nov. 29 in Science magazine.

Flowers said there is significant controversy among scientists over the age and evolution of the Grand Canyon. A variety of data suggest that the Grand Canyon had a complicated history, and the entire modern canyon may not have been carved all at the same time. Different canyon segments may have evolved separately before coalescing into what visitors see today.

Flowers had already once shown that the age of the canyon may be older than thought when she and her team analyzed an eastern section of the Grand Canyon. She found that specific area may have developed some 55 million years ago. She said the variety of data suggests the canyon had a “complicated history” and that the entire modern canyon may not have all been carved out at the same time, but rather evolved separately into what visitors experience today.

The current most widely accepted theory says the canyon is five to six million years old, determined by the age of gravel washed downstream by the Colorado River that carved out the canyon. Recently, there has been more debate about the actual age of the canyon because of new dating tools available to scientists. Flowers and other theorists who believe the canyon is in fact much older argue that the majority what we know of the canyon today was not carved by the Colorado River, but by two other rivers – the California River and another river. She promulgates that Colorado River did not come in until after some canyons already existed.

Flowers admits that the canyon that may have been around 65 million years ago is not exactly the canyon we know today.

Associate Professor of Geology at Utah State Joel Pederson supports Flowers on her paper, but said it is taking a look at the parent canyon of the Grand Canyon, not necessarily the one that we know today since Flowers’ research is a study of erosion, one of the hardest problem in geology.

Image from B Rosen on the flickr Creative Commons