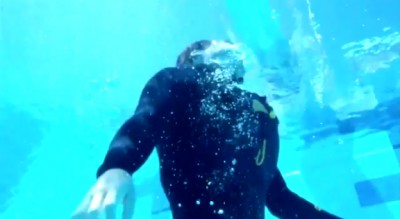 Patagonia’s new self-inflation vest is still in the research and development phase, but it’s certainly getting people excited. The inflatable vest is designed to be worn underneath a variety of wetsuits for surfing, kayaking, and other water sports. At this stage in the product’s development, wetsuits must be altered to allow the vest to function, but that is something Patagonia developers are working to improve.

See how the vest works and hear from the developers in the video below.

Original release by Patagonia on December 10, 2012

“Inflation vests are pretty much mandatory if guys are going to go out and push it in big-wave conditions the way they want to,” says Jason McCaffrey, Patagonia’s director of surf. “Our main concern right now is to have a product that will help improve safety when surfing giant waves.”

A while back, Patagonia’s Research and Development division, known as The Forge, began work on an inflatable vest. The company turned to Patagonia ambassador and big-wave surfer Kohl Christensen for ideas on what would make the ideal inflation vest.

“We sent Kohl early versions last winter and gathered feedback,” says Walker Ferguson, Patagonia field testing manager. “What we got back was fairly consistent – we needed a vest that could be incorporated in a variety of suits, support multiple inflations, and be deflated easily.”

For months Christensen and Patagonia engineer Casey Shaw experimented with various pulls, valves and bladder configurations. Each new iteration of the vest would be taken down to the pool and tested. “With R&D, you are always trying to improve the tools you use, without reinventing the wheel,” Shaw says. “This project has been a tremendous opportunity to build something that may substantially impact a surfer’s experience and improve safety in giant waves.”

Eventually, Shaw and his team built a vest that can support four inflations, be worn under a variety of wetsuits (short johns, springs suits, and full suits), features an air release valve, achieves face-up orientation in flat water testing, and allows the surfer to paddle and swim when fully inflated. Presently, a wetsuit must be altered by Shaw and his team to be compatible with the prototype vest. Testers also must go through a safety course before they can use the vest.

On November 30th, Patagonia presented a prototype of the Portable Self-Inflation vest to big-wave surfers at the Big Wave Risk Assessment Summit at the Turtle Bay resort in Hawaii. The response from surfers was resoundingly positive and optimistic.

“I can’t wait to see where this kind of gear will be two years from now,” says Dan Malloy, Patagonia ambassador and a participant of the summit.

Patagonia has provided a number of prototypes to top big wave surfers in the world to test this winter. The product is still in its test phase, and not available for sale at the consumer level yet. Patent is pending. A video about the vest can be found here: https://vimeo.com/55288281 and http://youtu.be/uNJeIStDn_A