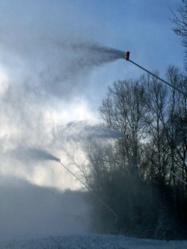 Upgrades in snowmaking paired with ideal temperatures have propelled Vermont ski resorts into a promising early season. After starting the season with the most ski areas open in the country for Thanksgiving, Vermont’s snowguns have launched the resorts into December with nearly 20% open terrain for skiers and riders, the strongest opening since the epic 2008-2009 season.

“We can certainly attribute a successful early season to our expansive 80% statewide snowmaking coverage,” said Ski Vermont President Parker Riehle. “The resorts’ investments in state-of-the-art, highly efficient snowmaking combined with early season snowfall have given us the boost we need to fulfill the pent up demand of skiers and riders.”

Vermont ski areas also boasted some of the earliest openings in the state’s history. Killington Resort opened for pass-holders in mid-October and for the season on November 5, 2012. Smugglers’ Notch Resort saw its earliest opening in 5 years with more available terrain than in the last four, helping early season lift ticket sales and bookings, which in the last two weeks have been some of the strongest in 3 years.

“Burke Mountain had its earliest and most successful opening ever, opening December 1st,” said Hannah Collins, Burke’s Marketing Manager. “And with the new upgrades in our snowmaking equipment we were also opening with the most trails that we ever have.”

Jay Peak Resort had its best opening weekend in the resort’s history and that excitement is projecting forward. Jay Peak is averaging a 93% occupancy across all of its lodging properties with most holidays already sold out. Jay Peak and Burke Mountain have invested a combined $1.5 million in snowmaking upgrades in expanded coverage and low-energy snow guns.

As temperatures drop to seasonal levels, Vermont ski resorts are firing up their guns yet again to prepare for another stellar early season weekend. Middlebury College Snow Bowl plans to open for the season on Saturday, December 8th and Bromley Mountain and Burke Mountain will reopen for the public on Saturday as well.