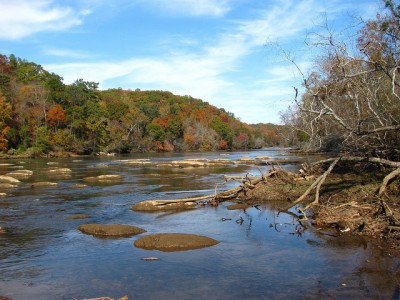 View of the Chattahoochee River at Atlanta, Georgia

A proposed extension of the Appalachian Trail aims to serve as a history lesson, a boon to business and a more ambitious endeavor for anyone who seeks to hike the trail in its entirety. The nonprofit organization Trust for Public Land has been working for years to acquire land along the Chattahoochee River in the southeastern United States, where the Appalachian Trail (AT) ends at its southernmost point. The organization intends to make this land available to the National Park Service and other partners for an extension of the AT that would lead all the way to the Gulf of Mexico.

Currently, the approximately 2,184-mile AT begins in the middle of Maine and ends in northern Georgia. It crosses the Chattahoochee River’s uppermost headwaters. Curt Soper, the Georgia-Alabama state director of the Trust for Public Land, told ABC News that the non-profit envisions Appalachian hikers being able to continue on a trail down along the river to the Gulf of Mexico at the shores of Florida.

Hikers would be able to walk on trails along the banks of the river, which becomes the Apalachicola River once it crosses the Georgia-Florida state line, or they could canoe or kayak down the river to the gulf. The Chattahoochee River flows south from northeastern Georgia then becomes the state border between Alabama and Georgia at Columbus, Georgia.

Appalachian Trail highlighted in red on the left. Highlight of the Chattahoochee River in dark blue on the right.

Seventeen thousand acres of land that touch 76 miles of river have already been acquired and set aside by the trust. Soper said the new route may be officially integrated within the next decade at the earliest. Hikers and business owners along the proposed trail are supportive of the idea.

Jerry Brown, executive director of the Alpine Helen/White County Convention and Visitor’s Bureau, said there are businesses in north Georgia, specifically the mountain town of Helen, which offer shuttle services between the town and the AT for hikers. The post office in Helen also gets lots of business from hikers who stop in to get packages or mail back supplies or items they no longer need.

In Florida, many agree that it will help business to bring in more hikers through the area. “It would be a natural extension and a beneficial one for us,” said Anita Grove, executive director of the Apalachicola Bay Chamber of Commerce in Apalachicola, Florida.

The Gold Branch Trail along the Chattahoochee River

Hiker Homer Witcher, 70, from Daleville, Virginia has hiked the entire trail and he plans to do it again soon. He likes the idea of a longer trail. “Any time you can have more trails, it’s good, I think,” Witcher said.

The Chattahoochee River is well-known river in the area for its rich history and role in the U.S. Civil War. During the war, Confederate gunboats would patrol the river and forts were built along the water to stop Union forces from reaching Atlanta. Before Native American tribes were removed from the area by European and American settlers, the river served as a dividing  line between the territories of the Cherokee and Muscogee (Creek) tribes. Long before then, in prehistoric times, the river was inhabited by indigenous peoples since at least 1000 B.C., according to The New Georgia Encyclopedia.

In a related project, the trust is working on the Chattahoochee Valley Blueway, which is aimed at creating a “canoe trail” or a marked waterway with designated canoe/kayak launch sites along 52 miles of the river from West Point to Columbus in northwest Georgia.