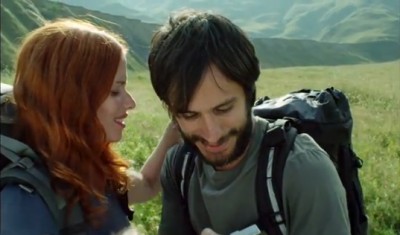 The Loneliest Planet made its U.S. debut late last month after being shown in numerous festivals and other countries since August 2011. Every description of the film online purposely dances around the plot, not giving it away since part of the movie’s appeal lies in one mysterious moment that changes the entire course of the film.

What we do know is that The Loneliest Planet is a fictional thriller that follows a group of hikers through the Caucasus Mountains in Georgia (the former Soviet republic, not the American state). Specifically, two soul mates, just engaged, depart for for a hiking expedition though a varied landscape before the wedding. The region ranges from subtropical lowland marshes and forests to glaciers, highland semi-deserts, steppes and alpine meadows.

Watching the preview (below), one wonders whether “the moment” that turns the couple away from each other is an accident sustained on the hike, a glimpse at someone’s true psyche, an oncoming mental illness, or any other twist the filmmaker can throw at the audience. Does it have to do with their experiences on the hike or is the landscape simply the backdrop for the action to take place?

The film’s director, Julia Loktev, chose to film in the mountains of Georgia after she read a story by Tom Bissell set in the same place.

“I remembered his short story when I was traveling in Georgia myself,” Loktev said in an interview with Examiner. “Being in that space, traveling with a backpack, being with a boyfriend, brought me back to that short story. At the center of this short story is this incredible incident that really rocks this relationship and really challenged my assumptions as to how I may feel in that situation. Something about being in the space of traveling made me want to make a movie about this.”

While the action purportedly focuses on what happens between the couple, they are not the only ones hiking. A guide was hired to lead them through the mountains. The film’s description says, “the three set off into a stunning wilderness, a landscape that is both overwhelmingly open and frighteningly closed. Walking for hours, they trade anecdotes, play games to pass the time of moving through space. And then, a momentary misstep, a gesture that takes only two or three seconds, a gesture that’s over almost as soon as it begins. But once it is done, it can’t be undone. Once it is done, it threatens to undo everything the couple believed about each other and about themselves.

“All the while, they are not alone. They are always with the guide, who witnesses their every move. The film plays off the relationship between young travelers and the places they travel to, between guide and guided. But at heart, it is a love story– a tale about betrayal, both accidental and deliberate, about masculinity, failure and the ambiguities of forgiveness.”

The Loneliest Planet debuts in the U.S.A. Friday, November 9th in multiple cities. It will also be featured at the AFI Fest in Los Angeles. Find more info at IMDB.com.

Image screenshot of film trailer by IFCFilmsTube on youtube