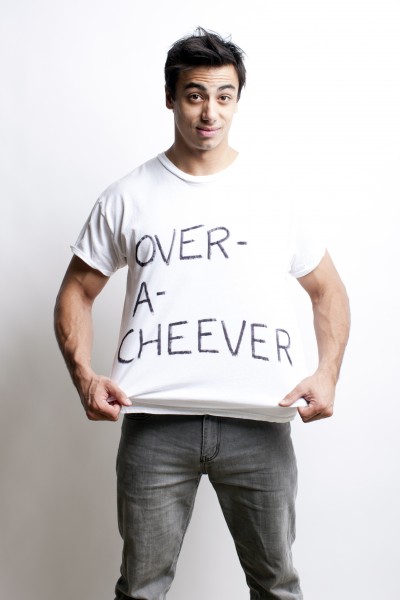 It’s easy to see why he wears a T-shirt proclaiming he’s an “OVER-A-CHEEVER”: when he races, nothing short of being the top man on the podium is acceptable.

He wants to win both an overall World Cup title and the world championships this season. And after that, he’s got his heart set competing for the U.S. in the 2014 Olympics in Sochi, Russia.

“To be 100% honest, every event I enter I expect to win,” e-mailed U.S. Snowboard Team rider Jonathan Cheever, 27, from Innsbruck, Austria where he is training for the December start of the World Cup snowboardcross season. “I do not compete for second place.”

Cheever’s hard-line attitude is echoed by mountain sports athletes everywhere. But he’s also got a unique trait that many fellow snowboardcrossers—that’s motocross on snow—don’t have.

His way to possible gold and glory comes with off-season work—as a plumber.

The blue collar Boston native now living in Park City, Utah toils 12 hours a day in the off-season while also making sure he’s in the gym five times a week. That makes for some tough weeks, but come training, hands-on skills come in, well, handy.

“Sometimes we need an extra tool to fix a start gate when we are training in Utah or Colorado and I always run to the back of my truck to grab a sawzall or something,” he commented.

Snowboardcross, also called boardercross, is a fast-paced action sport where a pack of riders blitz down an obstacle-laden twisted course on jumps, berms and rollers at breakneck speeds. Speed is key, but there’s also strategy involved, like where to try to overtake someone. Also, being the first out of the start, called getting the hole shot, is a plus.

“Sometimes it’s frightening,” he explained. “Hitting jumps and features with three or four people next to me is unreal.”

Cheever is the 2011 U.S. Champion. On the U.S squad for six years, he has 37 World Cup starts, made the podium four times and collected 14 top ten finishes since making his 2006 debut.

He’s also competed in the X Games with a fifth place 2011 finish.

But the sport took a hard hit this summer when ESPN announced it dropped what it calls Snowboarder X from the upcoming 2013 Winter X Games in Aspen, Colo. A staple since the Winter X Games 1997 debut, organizers left open the possibility of the sport’s possible future return. They also cut Skier X (skiercross) and Mono Skier X (adaptive skier cross) from the line-up.

“I feel that my stock has gone down,” Cheever admitted. “However, there are some movements to get this back. I am not the only athlete that feels that X Games was our Superbowl.” Several athletes and ‘cross supporters have launched on-line campaigns for the sports return (ifyoubuilditwewillcome.com and www.facebook.com/IfYouBuildItWeWillCome).

The announcement’s timing is crazy for Cheever, as he and videographer Brett Wiese Saunders are embarking on the making of a documentary about snowboardcross called SBX The Movie ( www.facebook.com/SbXtheMovie and sbxthemovie.com) that follows international riders over the course of a year and half, culminating with the 2014 Winter Olympics.

With a spring/summer 2014 anticipated release, Cheever and crew raised nearly eleven grand for the project so far through Kickstarter.

“I guess since this is such a passion project I can probably go on for days about it,” wrote Cheever. He hopes to showcase the sacrifices (both personal and financial), risk, and desire that comes with trying to be the best on snow.

For now, he’s concentrating on his upcoming races. He ruptured his Achilles heel in March and feels fine some eight months after surgery. Some may think he’s old at 27 for his sport, but he feels he’ll be hitting his athletic peak between 32-35. Two-time Olympic SBX gold medalist Seth Wescott was 33 when he won his second gold medal in 2010 and is still going.

Once Cheever was off crutches in June, he went through rehab and returned to training while moonlighting as a plumber.

“Was it ideal for work or for training?” he asked. “I would say yes. I was able to get in the gym during the day and work into the early AM.”

He’s feeling fast and strong now. There’s nothing like on-snow training and that’s what he’s doing now getting those muscles and balance back on track.

Then come December, he’ll be back in the starting gates, looking to get the hole shot during a season he hopes will lead to a crystal globe and ultimately a career with less plumber’s putty.