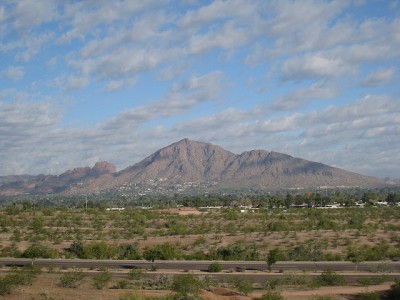 Many dangers await outdoor recreationists who enter into the home of the wild: Mother Nature can toss inclement weather at you, dangerous animals, infectious diseases and harmful vegetation. Although killer bees were probably one of the last worries on the minds of three young men out hiking in preparation for Marine Corps boot camp, the bees ended up being the demise of 19-year-old hiker Joshua Ruzsa.

Ruzsa and two of his friends set out last Monday for a grueling hike around Camelback Mountain in Phoenix, Arizona. The three left the trail to climb up a cliff face. Along the ascent, the group came too close to a hive of Africanized bees, known as killer bees for their aggressive nature. They swarmed around the boys, relentlessly stinging them a number of times.

Ruzsa attempted to climb to the top of the mountain to get away from the bees. As he swatted them away and climbed, he lost his footing and fell about 150 feet. At this time, is it unclear whether the bees stings or fall killed him.

The other two unidentified hikers managed to find an alcove to hide in until rescue workers arrived. The Phoenix Fire Department came to the rescue by helicopter. Firefighter Todd Lentz was let down from the helicopter wearing a full bee suit to reach the men. One at a time, they were evacuated from the cliffside.

Later, it was determined that one of the hikers was stung about 300 times, while the other suffered more than 1,000 stings. “They were beat up pretty bad,” Fire Department spokesperson Capt. Scott McDonald told CBS 5 Arizona. “One paramedic told me easily over 100 stings to each of them. Too many to count.”

Firefighters told ABC 15 reporter Navideh Forghani that humans can handle up to seven stings per pound before the attack is fatal and how to minimize stings in the video below.

Ruzsa’s father Denis Ruzsa misses his son incredibly. He said Joshua was someone who “was always trying to go above and beyond.” He was scheduled to report for duty on November 19. Denis remembers a Joshua who would strap on a 60-pound pack to go for an exhausting hike in the mountains then jog home in preparation for the Marines.