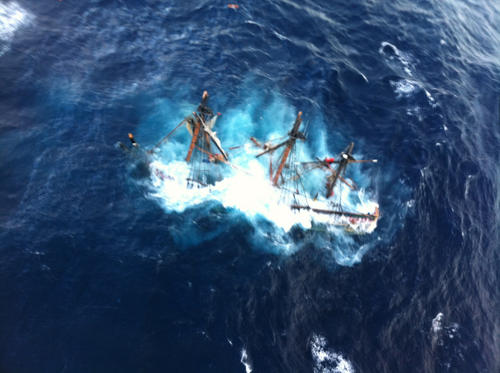 In the first major U.S. Coast Guard search and rescue operation associated with Hurricane Sandy, the Coast Guard has rescued 14 people from life rafts in the Atlantic Ocean approximately 90 miles southeast of Hatteras, N.C. The search continues for two people who remain missing from the crew of HMS Bounty.

A Coast Guard search airplane was launched from Coast Guard Air Station Elizabeth City Sunday evening which established communication with the Bounty’s crew upon arriving on scene. The vessel was reportedly sinking in 18-foot seas accompanied by 40-mph winds.

By the time two Coast Guard rescue helicopters from Elizabeth City arrived on scene at approximately 6:30 a.m., the 16 crew members had reportedly divided among two 25-man lifeboats and were wearing cold weather survival suits and life jackets. Air crews located and rescued 14 of the 16 crew members.

The HMS Bounty is reportedly sunk but the mast is still visible.

A Coast Guard search airplane and two rescue helicopters are currently on scene searching for the two remaining crew members with Coast Guard Cutters Elm and Gallatin en route to assist with the search.

Coast Guard assets are currently positioned to respond in the aftermath of Hurricane Sandy. If you or a loved one encounter a maritime emergency, contact the Coast Guard on VHF radio channel 16 or local authorities by dialing 9-1-1.