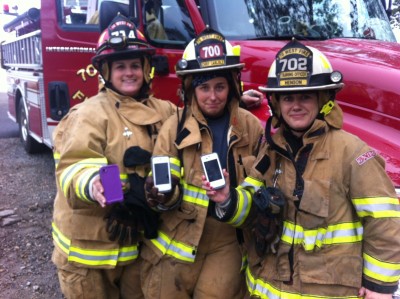 For some, like firefighters, the office is one big hazard. Perhaps nowhere is a phone in harm’s way more so than the three-alarm call that comes in the middle of the night for America’s firefighters.

When you think about fires, water isn’t the first thing to come to mind. However, if you’re asked to describe what will without a doubt destroy an iPhone, your answer will be water. One of the least talked about ramifications of a fire is the resulting water damage that comes from extinguishing the flames. Fires are fought with high-powered hoses delivering water at a force that can knock you right off your feet. These conditions are often found in the office of a fireman.

Often, firemen come out of a fire extremely hot and soaked. “It’s just about the time you take off your helmet that you have that ‘oops moment’ when you realize your phone was in your pocket at the time you put on your gear,” said Brandon Butler of the Little Rock, Arkansas Fire Department. “The one thing you don’t want to have to worry about is whether or not your phone will survive the emergency.”

The Lifeproof life jacket allows an iPhone to float.

Destroying her phone is one concern that Autum Carlisle, Arkansas Highway 70 Volunteer Fire Chief, doesn’t have, because she uses a Lifeproof case. “My Lifeproof has survived going into fires with me quite a few times and I expect it to protect my phone in many more.”

Jennifer Henson and Christy Louden, Arkansas firefighters and rescue and fire instructors, spend their free time on Arkansas lakes and rivers. Christy, an avid kayaker, loves her Lifeproof case because it keeps her phone safe at work and during play. “I use my Lifeproof while kayaking; the life jacket saved my phone more than once.” The life jacket allows the phone to float. It’s one thing to have a phone that’s waterproof, but if it sinks to the bottom of the lake, it won’t do you much good. The life jacket keeps the phone afloat until you can safely retrieve it. “Lifeproof is rugged enough to handle my lifestyle between firefighting and playing on the lake,” said Henson.

Work to play, Lifeproof survives even the demands of America’s bravest firefighters. I’m no firefighter–or kayaker–yes, but working behind a computer. I trust that Lifeproof will go beyond the call of duty for my lifestyle.