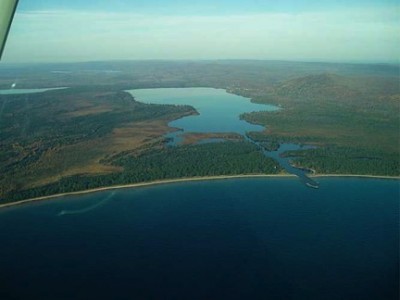 In the 1990s, the shoreline of Lake Superior at the tip of the Keweenaw Peninsula and parcels of land further inland were being eyed by developers to become an upscale residential neighborhood. The scenery at the site was gorgeous, crystal blue waves of Lake Superior were always lapping at the shore, a chirping, pristine forest stood nearby and wildlife roamed within sight of the potential development area. For those same reasons, a coalition of conservationists wanted to preserve the land and leave it to the wildlife.

Funds were gathered and the National Oceanic and Atmospheric Administration provided a $1.4 million grant to purchase 1,104 acres of the property. Now, in 2012, 1,475 more acres will be added thanks to the work of numerous conservation groups and governmental agencies. The Preserve is enjoyed by many for non-motorized use, such as hiking, bird watching, nature study, canoeing and kayaking.

The Bete Grise Preserve in Keweenaw County, Mich., will more than double by adding approximately 1,475 acres, according to the Healing Our Waters Great Lakes Coalition, an association of environmental groups.

A $1.7 million grant from the National Oceanic and Atmospheric Administration made the expansion possible, according to the coalition’s press release. “The grant protects one of the highest quality dune and wetland complexes in the upper Great Lakes…”

The preserve is spectacular, said Evan McDonald, executive director of the Keweenaw Land Trust, a conservation non-profit and a partner on the project.

“Places like Bete Grise, with these really healthy, extensive coastal wetland systems are really important ecologically,” McDonald said. “They’re a breeding and nursery ground for young fish, which attracts birds that feed on young fish. The life cycle of the lake is very much dependent on these coastal wetlands being healthy.”

The details of the donation are still being negotiated, said Gina Nicholas, chairwoman of Houghton Keweenaw Conservation District, a conservation group and partner on the project. Figures like the exact amount of acreage won’t be known until the project is complete. The parallel lines in the vegetation were formed by the retreat of glaciers. Photo: Evan McDonald.

The preserve is also notable for its unique “dune swales.” These parallel lines in the vegetation show the historical lake levels of Lake Superior following the retreat of the last glaciers, McDonald said.

“When the lake was at a stable level, a sand dune would form at the beach,” McDonald said. “Then the lake level would lower a couple feet and be stable for a certain amount of time and that would form another new dune.”

The dunes are now ridges that are dry enough for trees to grow on. Bogs and wetlands inhabit the troughs in between, McDonald said.

Funds also came from the U.S. Fish and Wildlife Service and the Michigan Department of Environmental Quality, according to McDonald.

The administration’s funds were provided through the Great Lakes Restoration Initiative, according to Healing Our Waters.

“We were really pleased to have the support of the Keweenaw Bay Indian Community,” McDonald said. “This was a very significant site for them culturally and they were pleased that, through this partnership, it was possible to preserve this land forever.”