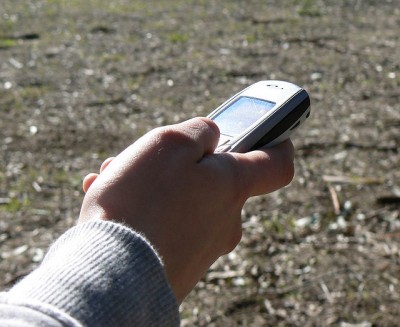 Many states in America have already banned texting while driving, but should they also consider banning texting while walking? Of course not, that’s silly, but those against texting and walking may have a poster child if the thought were to be entertained in politics. (Two, actually, if you remember the California man who almost ran into a bear while texting and walking.)

On September 17, Maria Pestrikoff had to be rescued by emergency responders when she simultaneously was texting and trying to dispose of a cigarette butt and slipped off a beach bluff near downtown Kodiak, Alaska. She fell 60 feet onto rocks below, just 10 feet above the incoming tide, reports the Kodiak Daily Mirror.

Lucky for her, a friend, Anthony Burke, heard her screams and called emergency rescue. Rescuers were able to reach her and take her to a hospital. She did sustain multiple injuries from the fall, but is in stable condition and recovering at an Anchorage hospital.

Image from Ken Banks (kiwanja) on the flickr Creative Commons