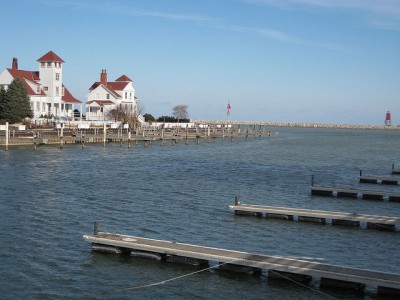 Lower water in the Great Lakes has many recreation boaters, charter fishing operations and shipping companies worried about long-term revenue.

Unusual heat this summer boosted water traffic around the basin. But it also caused water levels to continue to drop, forcing many boaters to quit the season up to five weeks earlier than expected.

For John Killius, owner of Lake Ontario’s Henchen Marina in Henderson Harbor, that means the loss of big money.

“This is not good for us,” Killius said. “The fall of water levels shortens our season and boaters have already started taking the boats out of the water.”

Henchen Marina annually packs about 75 fishing and charter tour boats. The owner’s income this year took a 15 percent hit because of the low water, he said.

The biggest concern of most marina owners is whether the water will rise again in the spring.

“If the water stays at the same level, our boaters might not rent boat slips as expected and there is a risk of losing them for the entire season,” Killius said.

In August, the water level in Lake Ontario was around 243 feet above sea level. That is 9 inches lower than last year, according to the U.S Army Corps of Engineers.

Lake Michigan is down by 23 inches, reaching 577 feet above the see level. That is five inches above the historic low recorded in 1964.

Such a decline significantly reduces the water level in the channels that connect the lakes and in the harbors. It puts business owners like Jim Clark, general manager of the Chicago Yacht Club, in a dire situation.

Clark said low water makes it difficult to reach certain parts of the lakes. Some of his tour boats and big sailing boats have already stopped operating.

“Some of the destinations are no longer available to our boats and we certainly carry some financial losses on that,” he said.

Every year Clark’s company organizes the sailboat race from Chicago to Mackinac Island. It includes 350 boats.

This year the low water kept them from docking many boats on the island, he said, “We moved them to Mackinac City and St.Ignace, which added up our costs.”

Dave Barney, the co-owner of marina, said many were clients who normally come every year from the southern part of the lake.

“We have enough water in our area,” he said. But shallow water elsewhere in the lake kept many regular customers from reaching him.

Lake Erie waters fell 13 inches from last year and is estimated at around 569 feet above the sea level, according to the Army Corps report.

Barney covered some of his financial shortfall by accommodating other sailing boats operating in the northern part of the lake.

“Water level at some nearby marinas was too low this year and their boaters came to us,” he said. With every boat that does come in, he makes additional money.

Erieau Marina is a deep-water marina able to accommodate around 300 boats up to 140 feet long.

Global Montreal reports that water in the rivers and lakes surrounding Montreal are at their lowest in more than a decade, causing safety hazards for boaters but also destabilizing the coastal ecosystem.

According to the National Weather Service, water levels in all the Great Lakes and Lake St. Clair are projected to be this much below their averages during the next six months:

Image from Richie Diesterheft on the flickr Creative Commons