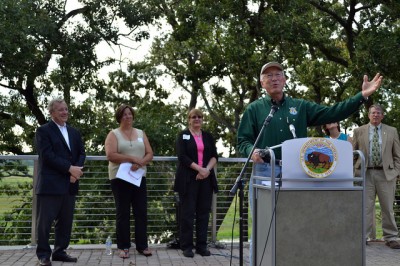 Secretary of the Interior Ken Salazar announces that he has authorized the establishment of Hackmatack National Wildlife Refuge.

Just 50 miles south of Milwaukee and 60 miles north of Chicago sits a pristine parcel of land recently approved by the U.S. Fish and Wildlife Service (FWS) to be the next wildlife refuge in the National Wildlife Refuge System.

The Hackmatack National Wildlife Refuge will be officially established once its first piece of land is acquired. On July 10, 2012, the FWS’s director provided written authorization to proceed with the project to acquire 11,200 acres on the border of Illinois and Wisconsin, according to a fact page for the refuge.

[The refuge] will provide for restoration of wetlands, prairie and oak savanna habitat and provide a home for 109 species of animals and plants that are of concern. The list includes 49 birds, five fishes, five mussels, one amphibian, two reptiles and 47 plants.

The Lost Kame Marsh, which will be protected as park of the Hackmatack National Refuge.

The Service will also provide ample environmental education and recreational opportunities for visitors, including the 3.5 million people within 30 miles of the refuge.

“Today’s announcement is really about the power of partnerships,” said Service Director Dan Ashe, who last month authorized the refuge’s boundaries. “After important input from the public, including conservation leaders, hunters and anglers, and members of the local communities, we’re taking an important step forward to protect this key habitat and make the area available for generations to come.”

As is the case with the 556 national wildlife refuges nationwide, hunting, fishing, wildlife observation, photography, environmental education and interpretation would be priority uses of the refuge.

The actual refuge itself will span 11,200 contiguous acres in the shape of a doughnut. The land in the middle is reserved for farmland. The FWS expects the area to attract more than 200,000 visitors per year.

Below is an image of the proposed location from a presentation on the refuge to the FWS.