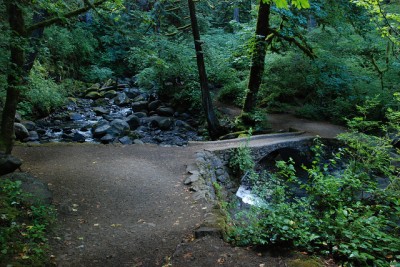 The area around Multnomah Falls along the Columbia River, where the hikers were supposed to end up.

Spoiler alert – this story has a happy ending. An experienced hiker from Estacada, Oregon and his six-year-old nephew intended to go on a short hike covering only six miles. Hours later, as the hikers lay among moss and the frigid forest floor in the middle of the night, they knew it could be worse.

Tom Hallman, Jr. for The Oregonian first reported on how hiker Dean Adams is a textbook example for other outdoorsmen and women about how a little bit of preparation can go a long way. Adams and his nephew Kyle Miller set off for their hike between Horsetail Falls and Multnomah Falls along the Columbia River last Thursday afternoon. They intended to meet their family at a pick-up point at 8 pm. Although the journey went awry, Adams’ foresight and preparation ensured the trip didn’t turn into a catastrophe. Here are a few of the things Adams did right:

Last but not least, he kept a good attitude and kept his nephew’s spirits high when they rested in the small clearing surrounded by a few downed logs, one which served as their emergency bed.

So what went wrong for the experienced and prepared hiker? Well, something that can happen to the best of us. Adams simply took a wrong turn that led them three miles off the trail the two were supposed to be on.

As soon as he knew he was lost, Adams tried phoning for help, but his cell phone was out of service. As dusk crept in, Adams began using his cell phone as a flashlight, but a dying battery made him quit that at about 9:30 p.m. And we come to the next example of what he did right.

Adams quit walking right then and there, knowing that walking further could dig him deeper in trouble. The pair settled down for the night and talked about Discovery Channel’s survival show Man vs. Wild to keep their spirits high, according to Hallman’s report.

In the meantime, the pair’s family, who expected them to show up at the Multnomah Fall parking lot at 8 pm, became worried and called for emergency rescue. A search party did not find the pair that night. By early morning the next day, everyone in the area was aware of a lost pair of hikers.

The two were walking back on the Oneonta Trail near Horsetail Falls when another group of hikers spotted Adams and Miller and immediately asked if they were the lost fifty- and six-year old. They phoned deputies who met the hikers on the trail and their ordeal was over. The worst they had suffered was a bit of a chill during the night, but Adams had even more spare food with him, should the rescue have taken longer. Adams’ preparation and levelheadedness is now being held up as a model for all outdoors enthusiasts to follow.