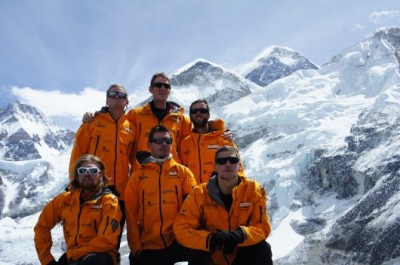 The charity Walking with the Wounded (WWTW) is a UK-based organization that funds the re-training and re-education of wounded British troops. The organization has released a new documentary that follows a group of former soldiers as they attempt to summit Mount Everest.

It is titled Harry’s Mountain Heroes in honor of England’s Prince Harry, who joined them for part of their previous journey to the North Pole. Prince Harry is a patron of the charity, trained with the team in preparation for the expedition, and supported them throughout the whole process.

Unfortunately, the group did not successfully summit, but Harry couldn’t have been more proud of his team. A recent press release describes exactly what the movie is about:

Harry’s Mountain Heroes is a 90 minute documentary following the soldiers training in the UK with Prince Harry as they prepare to take on Everest and to overcome their physical disabilities as a team. Set against the stunning backdrop of the world’s highest mountain range you will see them as they trek, train and acclimatise for their longed for summit attempt. You will watch them as they climb up the deadliest part of the mountain; the infamous Khumbu icefall and as the expedition is eventually cancelled due to a combination of bad weather and extreme danger on the slopes above. And although their attempt this year failed, they have gained strength and learnt valuable lessons that will help them all as they face life back in civvy Street again.

The team is composed of truly memorable characters, each with their own real-life story of perseverance and survival:

Private Jaco van Gass lost his left arm in an RPG attack in 2009 and Private Karl Hinett suffered 37% full thickness burns in a petrol bomb attack in Basra. Captain Martin Hewitt and Captain David Wiseman were both shot through the chest in Afghanistan; Martin lost the use of his right arm whilst father of two David had to undergo 4 operations and 18 months of rehabilitation. And Captain Francis Atkinson was ambushed and shot in 2011, severing the nerves which control his right hand, ending his chances of becoming a surgeon.

The film aired for the first time on British ITV1 on Monday August 27. Click here to find out more about each soldier involved.

Image from Walking with the Wounded