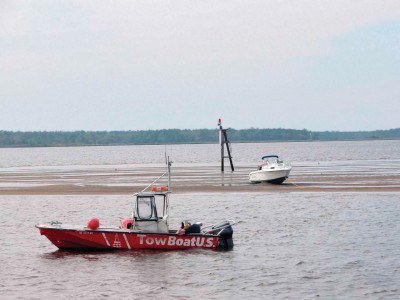 Every fall, thousands of snowbirds – of the recreational boating kind – migrate south by boat via the Intracoastal Waterway that threads along the coast from Norfolk, Virginia to Miami. With severe shoaling in many areas, following the course isn’t easy, with groundings and delays getting more common each year. At just about the same time this annual migration peaks, another course to ensure the future of the historic waterway will be charted out at the Atlantic Intracoastal Waterway Association’s Conference Nov. 13 – 14 in Charleston, South Carolina. Interested parties and Intracoastal Waterway (ICW) advocates are urged to attend.

“As the country looks to create jobs and grow the economy, lessen environmental impacts, and invest in infrastructure projects to move us into the 21st century, the Atlantic Intracoastal Waterway should be a priority,” says AIWA Chairman Stephen Furlough. “This is an underutilized resource that meets these objectives, and has served the nation for over 70 years. But, it’s in trouble now.”

A particular feature of this year’s conference will be engaging all levels of government with the commercial maritime industry and the recreational interests that depend on the waterway. Other sessions will address the current situation for navigation along the 1,100-mile route, updates on problem shoaling areas and long-term solutions to chronic federal funding shortages. Tourism interests, the academic community and state and local governments are beginning to recognize the waterway as an asset to the region. Sadly, however, funding for dredging and maintenance have dried up, much like the ICW’s sun-baked shoals at low tide.

Boat Owners Association of the United States (BoatUS) is a charter member of the association. More information and conference registration is available at: www.atlanticintracoastal.org/2012-annual-conference. Sponsorship inquiries are also welcome.