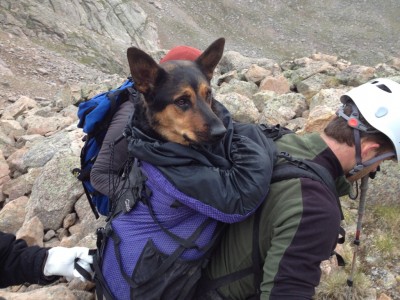 Photograph of the rescue posted by user SolarAlex on 14ers.com

The tale of Missy the German Shepherd has become a widely reported-on story by bloggers, forum members and the media alike. A Facebook page has been started to petition for ownership of the dog and to commemorate the motley crew of rescuers. How did this dog-rescued-from-a-mountain story begin?

In late July, Anthony Ortolani was hiking with his friend and his German Shepherd, Missy, on Mt. Bierstadt in Colorado when her paws became too sore to continue. According to numerous reports, Ortolani said,

We were lowering her for a while with ropes from boulder to boulder but she was hurting herself worse against the rocks sprawling out and catching them with her legs. Eventually she just stopped standing or moving at all and I knew she was pretty badly hurt. I picked her up on my shoulders and was hopping from boulder to boulder but I couldn’t keep her on me. I dropped her once and I almost fell once too and I realized that I couldn’t carry her off of the mountain. At this point I made the decision that I honestly never thought I would even be faced with. I left her there so that my friend and I could get down safely with intentions of calling S&R when we were off of the mountain.

When he came down, Ortolani learned that search-and-rescue does not come to the aid of dogs. Ortolani could not return that day because of the storm and a work project the next week kept him from coming back. He thought Missy’s fate was sealed.

A little more than a week later, on August 11, a pair of hikers, Scott and Amanda Washburn, came upon the dog in poor condition: it was weak, injured with cuts on all four legs and dehydrated. Missy had been stranded at 13,000 feet with no food or shelter at Sawtooth on Mt. Bierstadt. She didn’t look like she would survive much longer. The hikers experienced the same problems as Ortolani and couldn’t take her down the mountain themselves.

That day, the Washburns posted their discovery to the 14ers.com forum, a mountain climbing/hiking site dedicated to Colorado’s 54 fourteeners (mountains 14,000 feet in elevation or higher). The post read,

My wife and I were doing Bierstadt/Evans today via Sawtooth. We found a female german shepherd that was injured and appears to have been there for several days. We gave her food and water but were unable to get her out. Her paws are pretty damaged and she refused to walk (unfortunately she is too big to carry and wasn’t cooperative).

They posted photographs, maps and organized a search-and-rescue operation through the forum. A group of strangers came to Missy’s aid and successfully brought the dog down in a nine-hour round trip two days later. When Ortolani learned of the rescue, he was speechless. He asked that his dog be returned to him, but rescuers felt otherwise.

A Facebook page has been created to stop him from doing so, straightforwardly titled Stop Anthony Ortolani from getting Missy back. The Clear Creek Sheriff’s Office didn’t think he should get the dog back either and has charged Ortolani with animal cruelty. His first hearing is scheduled for October 16 while Missy resides with temporary caregivers.

Image from SolarAlex via 14ers.com