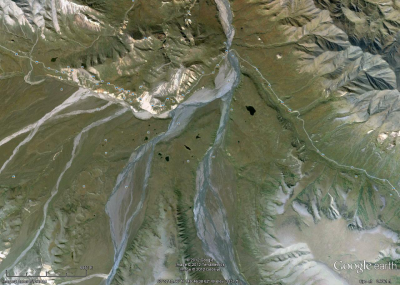 Denali National Park and Preserve officials confirm that a solo backpacker was killed by a grizzly bear along the Toklat River the afternoon of Friday, August 24.   A wallet with probable identification of the victim was found near the kill site, and NPS rangers are working to make positive confirmation and notify next of kin.

Friday afternoon, three dayhikers first discovered an abandoned backpack along the Toklat River approximately 3 miles south of the Toklat River Rest Area.  Upon further investigation, they saw evidence of a violent struggle, including torn clothing and blood.  They immediately hiked back to the rest area and notified the NPS staff of the findings at approximately 5:30 pm.

Park rangers launched a helicopter and a fixed wing aircraft from park headquarters at 8:00 pm.  Searchers on the aircraft located the scene at 8:35 pm.  At least one grizzly bear was still at the site, although there may have been multiple bears.  The bear(s) moved away when the helicopter approached and landed.  Two rangers on board the helicopter got out and confirmed the location of the victim’s remains.

Initial evidence indicates that the attack occurred proximate to the river’s open braided gravel bar, although the bear subsequently dragged the remains to a more secluded, brushy cache site.  After conducting an initial surveillance of the site, the rangers determined that the recovery of the remains would need to wait until daylight due to the presence of bears and the waning light.

Park officials believe that there are no other registered backpackers in the immediate vicinity.  An emergency closure has been put in place, prohibiting all hiking and camping in that backcountry unit until further notice.

Park rangers will return to the incident scene on Saturday morning, August 25, to secure the site, recover the remains, and attempt to locate the predatory bear.  Wildlife biologists estimate that roughly 12 grizzly bears have been residing in the vicinity of the kill site this summer.

This incident is the first known bear mauling fatality recorded in Denali National Park and Preserve. All backpackers in the park receive mandatory ‘Bear Aware’ training prior to receiving a backcountry permit, including a 30-minute safety video, a safety briefing from the backcountry ranger staff, and all backpackers are required to carry a Bear Resistant Food Container (BRFC).  http://www.nps.gov/dena/planyourvisit/bearsafety.htm

More details on this fatal incident will be released as the investigation continues.