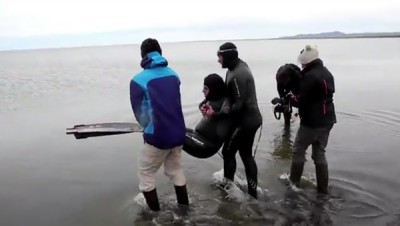 On a mission to swim around the world, French swimmer Phillippe Croizon has already symbolically swum “across the world” by crossing straits, channels and seas between Oceania, Asia, Africa and Europe in just one summer. Croizon, 44, a quadruple amputee, will finish his grand tour by swimming between the United States and Russia across the Bering Strait. He made headlines in 2010 when he first swam across the English Channel.

Seven years ago, Croizon lost his arms and legs when he was dismantling a television antenna from a roof and suffered a 20,000-volt electric shock. Since May, he and his swimming partner Arnaud Chassery have swum from Papau New Guinea to Indonesia, from Taba, Egypt to Aqaba, Jordan across the Red Sea, from Tarifa, Spain to Tangiers, Morocco across the Strait of Gibraltar. The message he aims to spread of one of “peace, solidarity and partnership” meant to show that disabled and non-disabled people alike can achieve the same goals.

Before the summer is over, Croizon will swim between the islands of Little Diomede and Big Diomede in the Bering Strait, officially crossing from the United States to Russia (Little Diomede is part of the United States, Big Diomede the Russian Federation). While the distance is only 2.2 miles, Croizon and his swimming partner Chassery will have to battle strong counter-currents and temperatures no warmer than 37.4 to 39.2 degrees Fahrenheit.

Both men swim at the same rhythm, but what distinguishes the swimmer’s is Croizon’s windmill movements as he swims the front crawl, and of course, Croizon’s prosthetic flipper attached to his thighs.

“I’m ready,” he says breathlessly to the AFP. “We have now been in the crossing conditions of cold and counter-currents. We’re going to have to get across very quickly to avoid the eddies between the islands. But the Bering, I want to eat it up…”

View the video below to see Croizon preparing for the swim and see what his prosthetic flipper looks like.