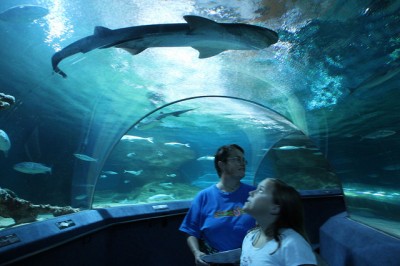 Discovery Channel’s annual Shark Week is an exciting time for viewers to be glued in horror to their televisions, but some water sports businesses get less excited about the creative programming and media buzz.

Kayaking and snorkeling guides report a drop in business for Shark Week every year it comes around – as much as 20 to 25 percent.

Owner of dive shop OEX La Jolla Mike Samer told NBC in San Diego, “We have to always say, I tell everybody who works for me, before you say the word shark, when you mention the leopard sharks…[you say] harmless leopard sharks.”

It seems that TV programming is enough to keep many water sports enthusiasts out of the water, whereas a handful of reports about actual shark attacks had only a minor effect.

Visitors to Samer’s dive shop tell him movies such as Jaws are the images they conjure up when thinking of encountering sharks in the open water. Those who choose to refrain from getting their feet wet this week may be playing the odds a bit too comfortably: according to the the Florida Museum of Natural History’s International Shark Attack File, the chances of suffering from a shark attack are one in 11.5 million (and the chances of being a victim of a fatal shark attack are less than one in 264.1 million).

This is the 25th anniversary of Shark Week, and it is one of TV’s most successful weeks of programming in history. Featured on Discovery Channel this week will be shows like Shark Fight, How Jaws Changed the World and a Mythbusters special that busts 25 shark myths.

Catch a preview of Discovery Channel’s programming in the short clip below.