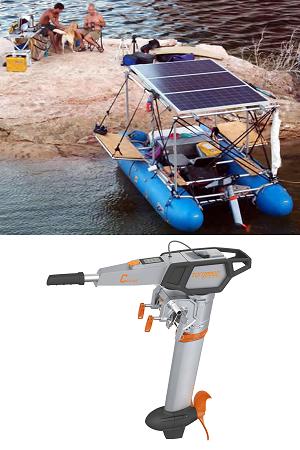 Recognized as an innovative leader in electric propulsion, Torqeedo continues to open up new opportunities for adventure. The company was recently part of the first all solar-powered trip across Lake Powell. A catacraft powered by a Torqeedo Cruise 2.0T Tiller motor crossed the lake, a reservoir on the Colorado River, which straddles the border between Utah and Arizona.

This solar powered experiment was the final leg of an expedition that was undertaken by four friends who are making a film. The entire trip took five weeks to complete, while the leg involving Torqeedo lasted five days. Jack’s Plastic Welding, Inc. is a major sponsor of the film.

“I know that it seems impossible, but it really did happen,” said Jack Kloepfer, president of Jack’s Plastic Welding. “We did not even touch our oars after we put the motor in the water, for about 85 miles.”

The Torqeedo motor monitors its battery usage and sounds an audible warning when the battery is getting low. This allows the operator to lower the speed to conserve energy and make it to the final destination.

“My observation is that we can run the motor at about 23.8 volts, and that is about the full amount of power available to the motor through the solar panels, if the battery is fully charged,” said Kloepfer. “If the battery is extremely low, some of that voltage is used to charge the battery. One can tell the battery charge state from the voltage of the battery when the motor is not running. We determined that 26.5 volts was close to full charge. It really was amazing how much power we could get by resting in the middle of the day, even for as little as a half hour.”

There are no mileage signs or buoys up the San Juan arm of Lake Powell. “I estimate our trip was 95 miles in five days. Five miles of river before the falls, five miles after the falls, and 85 miles of motoring with only the sun as our fuel source. One day we made 30 miles and much of the day was with head wind,” said Kloepfer.

“The use of the electric motor was far more pleasant that I thought it would be,” continued Kloepfer. “There is little sound produced by the electric motor, and it is quite a contrast to the big blasting engines that are on the lake. It was quiet, peaceful motoring on Lake Powell with free solar power. We are hoping that others will follow, and use solar power for their recreation more often.”

The Cruise 2.0T is perfect for dinghies, tenders, sailboats and motorboats up to 3 tons. Fully waterproof to IP67 standards for fresh and salt water use, it also features a tried and tested drivetrain for superior power and range from limited battery capacities. The Cruise 2.0T operates at 24V with 5-6 hp and weighs 39 lbs. A display on the tiller shows information regarding battery charge status, remaining range, speed over ground and input power.

More information on the film documenting this adventure can be found at http://www.thecurrentfilm.org.