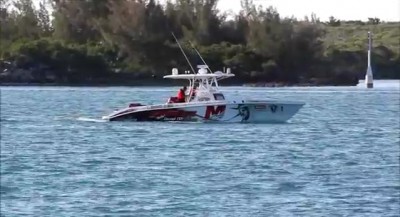 American Chris Fertig and his crew have set a record time in the 774-mile (673-nautical mile) Bermuda Challenge race that runs from New York City to St. George, Bermuda. Fertig’s time of 21 hours and 39 minutes beat the previously held record by 44 minutes (22 hours and 23 minutes).

The record Fertig and his crew broke was set in 2002 by Neil Burnie and Bill Ratlieff in a 30-foot Renaissance Prowler 306 catamaran equipped with Honda outboards.

According to Chris Landry for Trade Only Today, Fertig’s Statement Marine was equipped with an innovative air-cushioned deck that allowed the crew to maintain high speed in rough conditions. The air bags under the deck compensate for slamming loads, which allow the boat to maintain speeds of more than 30 knots in poor conditions. Fertig’s goal was to make excellent time when seas were calm to create a cushion to be able to slow down in rough seas. Still, he never wanted to go slower than 34 mph, which was the average speed of Burnie and Ratlieff’s boat in their record-setting voyage.

The Bermuda Challenge was created by Boating magazine in 1994. Prior to Fertig’s successful trip, only three other boats had completed the trip. All three were outboard-powered catamarans.

Watch the interview with the Bermuda racers below and see footage of their boat.

Image video screenshot of video by bernewsdotcom on youtube