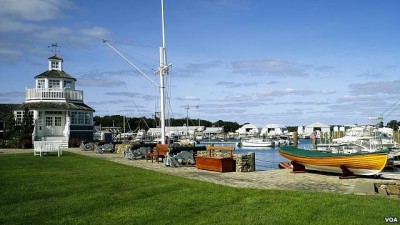 A narrow peninsula that looks like a scorpion curled around Cape Cod Bay, with its stinger pointed toward the Massachusetts mainland, is the summer capital of several northeast states.

Patti Page described it in a 1950s hit song:

If you’re fond of sand dunes and salty air,

Quaint little villages here and there,

You’re sure to fall in love with old Cape Cod.

According to some accounts, Vikings from Scandinavia set foot on Cape Cod as early as the year 1000.

For sure, English explorer Bartholomew Gosnold sailed the waters off Cape Cod in 1602 and named the peninsula for the plentiful codfish his men caught in its waters.

Eighteen years later, Pilgrim separatists from the Church of England landed at the tip of the peninsula before sailing to the mainland and starting a colony at Plymouth.

This is a perfect example of a pleasant little Cape Cod house that’s actually on Cape Cod. (Carol M. Highsmith)

Within a century, Cape Cod had become a fishing and whaling center, and Cape oysters, clams, and cranberries were delicacies on tables in Boston and New York.

But these days, tourism dominates the economy. Each summer, people go there to sunbathe and relax amid the little lanes and cozy cottages tucked away in the Cape’s bogs and woods.

Those efficient, one-story, shingled Cape cottages, with their central chimneys for winter warmth and steep roofs to slough off the snow, caught the fancy of architects and developers across the nation in the 1950s, when they created whole communities filled with them.

One escapes to Cape Cod, in part, for peaceful scenes such as this footbridge that leads toward Barnstable Harbor. (Carol M. Highsmith)

Residents and visitors alike agree there is something magical about the light on Cape Cod. It draws artists from around the world. They congregate in bohemian Provincetown, at the very end of a 65-kilometer-long national seashore.

There’s a saying in New England that people who live in “Boston and north go to Vermont and New Hampshire” to vacation.

“Boston and south go to Cape Cod.” And according to visitor statistics, thousands of people from “Boston and west,” all the way into New York State and Pennsylvania, summer in Cape Cod as well.