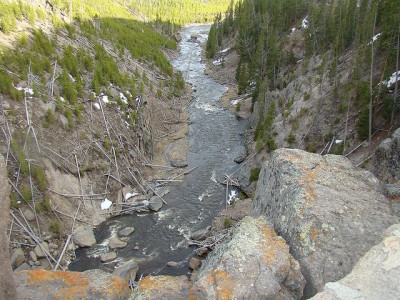 There will be a lot fewer anglers along the waterways in Yellowstone National Park starting tomorrow. In fact, some areas will see no anglers at all after officials announced complete closure of certain waterways. A dry, hot summer that sent water temperatures skyrocketing can be stressful and even fatal for trout and other fish.

To ease the stress on these delicate fish populations, the following waterways will temporarily close to fishing beginning August 1:

The Gibbon River has been above 73 degrees for most of the past two weeks. The Firehole River has been above 78 degrees. Weather forecasts call for more warm weather, which means that other areas could potentially be closed to fishing. There is no word yet on when the soon-to-be-closed waterways will reopen.

Image from Geoffrey Plauche (veritasnoctis) on the flickr Creative Commons