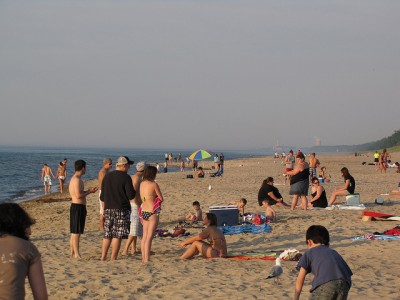 An unusually high number of drownings so far this year in the Great Lakes had one Great Lakes Echo journalist questioning whether the year’s abnormally high temperatures may be a link. He spoke with experts on the matter to get to the bottom of this.

His research yielded some interesting conclusions. Journalist Matthew Hall wrote that perhaps it’s not the heat itself, but just as shark attacks seem to be increasing, it may be human activity in response to the heat that has resulted in an 84 percent increase in drownings over this same time last year. Read the full report below to find out what factors may be responsible for the increased human drownings in the Great Lakes.

Great Lakes drownings are happening at a record pace this summer. Is it the weather?

The 49 drownings reported so far in 2012 represent an 84 percent increase over the same period last year, according to the Great Lakes Surf Rescue Project. The organization of surfers dedicated to reducing Great Lakes drownings reports 207 people have drowned since 2010, including 87 last year.

“A lot of times, they think it’s just a freshwater lake but it’s pretty much an inland sea,” he said. “Weather can change in an instant on the lake and seas can get rough. Winds can get high and they end up getting pulled out in rip currents…and they’re not as strong of swimmers as they thought.”

Rip currents are probably the single greatest cause of Great Lakes drownings, said Robert Pratt, executive director of education for the surf rescue group. They happen when waves travel over a break in a nearshore sandbar and are then channeled back toward the incoming waves, creating a funnel that can capture swimmers.

Record-breaking heat has gripped the region this summer and global warming caused by the burning of fossil fuels is associated with a greater incidence of extreme weather. But no one is linking the increased drownings directly to climate change.

“Places that have had rip current problems are the same places where we’ve measured them before,” said Jim Diana, director of the Michigan Sea Grant, a research, education and outreach agency under the National Oceanic and Atmospheric Administration.

“I guess if the intensity of storms increases then the frequency of rip currents would also increase, but I don’t think we have any good evidence that they’re expanding currently,” he said.

But the longer, hotter swim season could cause more drownings.

“The warmer summer you have, the hotter days you have, the more people at beaches, and the more exposure people have [to dangerous] circumstances,” said Charles Pistis, state program director of the Michigan Sea Grant. “So instead of swimming season from July to Labor Day, perhaps you’ll have more swimming days.”

“Think about March,” Pistis said. “Do you remember how warm March was this year?”

Lower water levels excavate sand from the nearshore bottom, making the offshore profile steeper, he said. That forces waves to dissipate in a narrower bend and accelerate rip currents.

And “lower water levels are a direct result of what’s happening in the climate,” said Meadows. The warmer the weather, which has been exceptional over the last ten or 12 years, the warmer the water. That increases evaporation which is a major way water leaves the Great Lakes.

Pistis agrees that low water and the right kind of sandbar structures could increase the potential for rip currents. But he is cautious about drawing a connection between climate change and water levels.

“I don’t think we’ve looked at this stuff long enough to say,” he said.

Lake levels have been decreasing since a record high was reached in 1980, according to a June report by the Great Lakes Integrated Sciences and Assessments Center, a research and outreach program under the National Oceanic and Atmospheric Administration.

However, other factors besides climate change, such as land use and lake regulations, also affect lake levels. Though most projections indicate a greater decline in levels with increasing greenhouse gas emissions linked to global warming, it’s still unclear how much of the trend can be attributed to that, the report said.

Scientists are often cautious about making causal links when it comes to climate change. They stress that the effects of climate change are complex and operate on a number of conditions, some seen, some unseen.

It is very difficult to link climate change to increased drownings, Pistis said.

But what can be said is that warmer weather drives more visits to the Great Lakes coasts, stormier weather increases wave intensity and the likelihood of rip currents, and mild winters lead to increased lake evaporation and lower lake levels or at best a continuation of low lake levels, he said.

Image from Dottie Day (santanartist) on the flickr Creative Commons