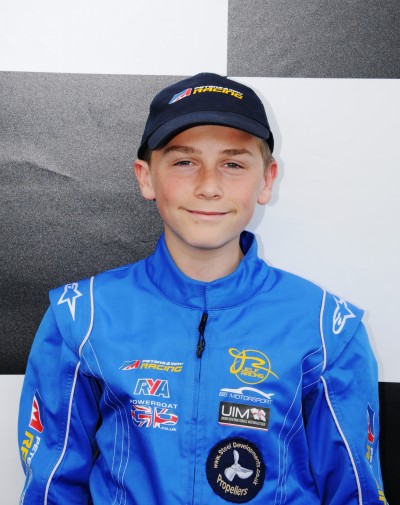 Eleven competitors from Estonia, Latvia, Russia and Great Britain lined up to battle for the 2012 UIM GT15 European Championship powerboat racing title in what was set to be some exhilarating racing from start to finish.

The championship would be decided over four rounds of racing with the best three results to be counted. Estonia’s Sken Heidemann got the competition off to a flying start taking the first heat win and in a really tight race Ben was forced to settle for 5th place.

Ben, who is Britain’s youngest ever World powerboat champion, was determined in heat two to pave the way for the rest of the championship and drove in what can only be described as his best race of his career, to finish the first day of competition on a high and take the win in the second heat.

As Sunday got underway Ben sat in pole for the third heat of the competition and got a great start, leading the race for the first three laps until Estonia’s Paul Zujenkov passed him in a superb manoeuvre.  In dirty water Ben further lost out to Reio Käsnapuu of Estonia in a photo finish and was forced to settle for third.

The championship campaign would go down to the wire with the last heat winner likely to take the title. Focussed and ready to do what was needed Ben and Team Jelf took to the water early and waited for the other teams to join them on the start grid.

As friends, family and supporters, including Peters & May staff back in Britain watched with baited breath through the live internet link, the race went under starters orders. Ben got off to a flying start and took the lead. Paul Zujenkov put pressure on from the start but Ben held his water taking tighter corners and the inside line to keep his rival at bay. By the 4th lap he started to pull away from the second placed boat and after leading the final race from start to finish cheers went up as Ben took the chequered flag and with it the 2012 UIM GT15 European Championship for the second consecutive year.

Interviewed after the race Ben was asked how he won the competition. “I’m not really sure! There was some really strong competition out there and I just raced the best I could”, he commented.

“The support from my family, friends and sponsors has helped me get here and it wouldn’t have been possible without them, it’s been a real team effort. I’d like to thank my sponsors Peters & May Racing, BS Motorsport, Tohatsu UK and Racebatteries.co.uk and of course my Mum and Dad because without their backing I wouldn’t have been able to compete in Estonia let alone win.”

Ben now heads to Osthammar in Sweden where he will compete to retain the GT15 World Championship title and has the full backing of British Powerboat Racers to bring the title home again.

Ben has built up quite a following among the team at Peters & May and several of them were watching the live steaming. Neil McKeown, a keen powerboat racing supporter and member of the marine team at P&M commented, “It was exhilarating to watch Ben push the boat and the level of competition was phenomenal, Ben and his family should be very proud, as we are at Peters & May, he did a great job, with great support and we wish him every luck in Sweden”.