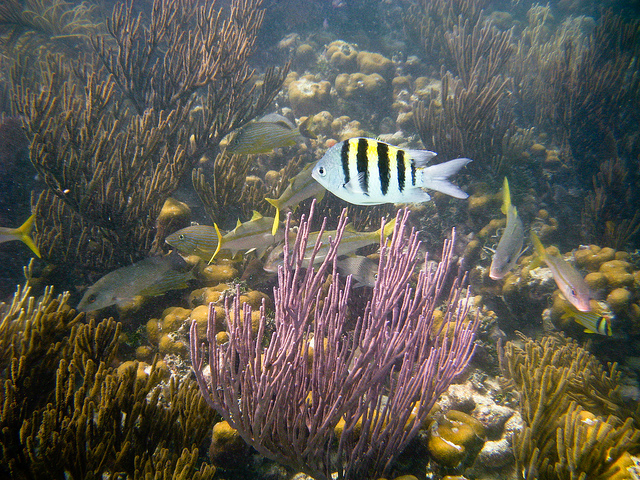 It’s not always easy to judge the success of collaboration. But thanks to five years of teamwork in the Dry Tortugas, anglers across Florida are seeing the collaborative benefits: more fish.

The Commission and the National Park Service (NPS) are proud to announce that the collaboration has been a success, not only to local populations of fish, but for fisheries management across Florida. Using modeling techniques, University of Miami researchers predict that the spawning groups in the Tortugas supply larvae that settle throughout Florida waters, including the Keys, the West Florida shelf and eastern coastal areas north of Miami. Research also shows that seagrass beds in the area serve as nursery grounds for many exploited reef fish species, such as red and black grouper.

Inside the Research Natural Area, researchers found the number and size of mutton snapper, yellowtail snapper, red grouper and hogfish all have increased over the past five years.

Dry Tortugas National Park is about 70 miles to the west of Key West and includes 100 square miles of marine waters and seven small islands. Congress established the park to protect and interpret the exceptional biological, cultural and recreational values of the area, including its pristine subtropical marine ecosystem and intact coral reef community. Despite its remote location, the park attracts more than 53,000 visitors a year for fishing, snorkeling, diving, bird watching, camping and viewing Fort Jefferson.

“These scientific findings are very encouraging and are exactly what we were hoping for when the RNA was established five years ago,” said Dan Kimball, Superintendent of Everglades and Dry Tortugas national parks. “The National Park Service greatly appreciates the Commission’s support of the RNA, and we look forward to an enduring, collaborative effort with the FWC and our other partners, continuing our commitment to long-term research and monitoring to fully understand the benefits of the RNA.”

The collaboration also brought about several advancements in mutton snapper research, including the first-ever observation of repeated mutton snapper spawning events at Riley’s Hump, a protected fish-spawning aggregation site in the Tortugas South Ecological Reserve. Taken to­gether, the results of the five-year science review suggest that the RNA has played a substantive role in enhancing exploited reef fish species populations in the region and, especially in the case of mutton snapper, likely contributed to the recov­ery of the spawning aggregations at Riley’s Hump.

The FWC and NPS hope to continue this work well into the future.

Learn more by visiting NPS.gov/drto/naturescience/index.htm or MyFWC.com/Research (click on “Publications”).