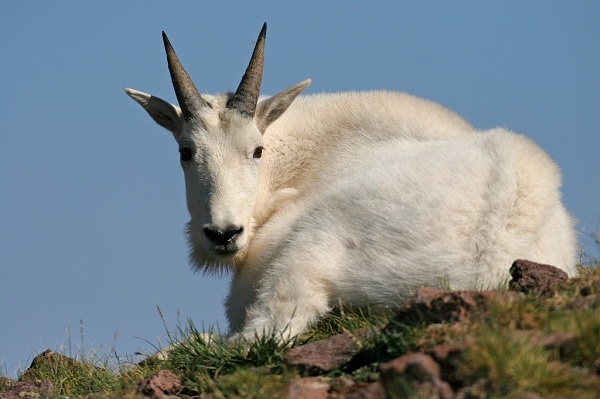 Mountain goat on the Tushar Mountains. Not the "goat man" in question. Photo by Lynn Chamberlain, Utah Division of Wildlife Resources.

Update 7-24-2012: According the Utah Division of Wildlife Resources, the “goat man” has been identified as an out-of-state hunter studying the animals. Click here to read more.

While it’s not illegal to dress up as a goat and go frolicking on a mountainside, many dangers potentially face the man behind the goat mask. An unidentified man has been seen and photographed in a goat suit among a herd of other goats by other hikers on Ben Lomond Peak in the mountains above Ogden, Utah, about 40 miles north of Salt Lake City.

“My very first concern is the person doesn’t understand the risks,” said Phil Douglass, Utah Division of Wildlife Resources, to the Associated Press. “Who’s to say what could happen.”

Douglass and others at his department are puzzled by what made the man seek close contact with wild goats. Their best explanation is that he is an extreme wildlife enthusiast unaware of the dangers of goats.

“They may get agitated. They’re territorial. They are, after all, wild animals,” Douglass said. “This person puts on a goat suit, he changes the game. But as long as he accepts responsibility, it’s not illegal.”

Amid Douglass’s fears is the approaching hunting season that begins in September. Sixty permits will be issued for goat hunting in that area and Douglass does not want the goat man to be one of them shot on accident, let alone attacked by a real goat.

Douglass received photographs of the man from hiker Coty Creighton, 33, who spotted the man on a Sunday, July 15 hike. (Follow this link to the photographs)

While out hiking, he saw a herd of goats and stopped to watch them for a minute. He noticed something odd about one goat that was trailing behind the rest.

“I thought maybe it was injured,” Creighton told the Associated Press. “It just looked odd.”

The herd was about 200 yards away so he pulled out binoculars to get a closer look. He was shocked to see a man wearing a crudely made costume with fake horns, a cloth mask and cut-out eye holes. The man was on his hands and knees climbing over rocks and bushes and rough terrain on a steep incline.

Occasionally the man would pull up the mask to navigate the rocky terrain. Then he spotted Creighton.

“He just stopped in his tracks and froze,” Creighton said. So Creighton hid behind a tree and snapped a few photographs as the man put his mask back on and caught up with the herd.

“We were the only ones around for miles,” Creighton said. “It was real creepy.”

Creighton relayed the awkwardness of the encounter to Douglass. Based on Creighton’s account, “the person acted very self-consciously when the two made eye contact. He sat down for a while and just sat there,” Douglass said on behalf of Creighton. “I think he was surprised that someone spotted him doing this.”

The story was reported on by local media. After the reports on Thursday, July 19, and one other time after that, Douglass received an anonymous call from an “agitated man” who said, “leave goat man alone, he’s done nothing wrong.”

Several people are now out to spot “goat man”, although there have been no additional sightings following the July 15 encounter. It was in a very remote area that requires a long drive and an eight mile hike to reach. Douglass said goat man must have put significant effort into this to be able to pull it off.

Others have suggested that the entire ordeal may just be a very elaborate hoax. Unless the goat man’s gone into hiding or it was indeed a fake, eager outdoor investigators may be finding the truth behind the masked man soon.