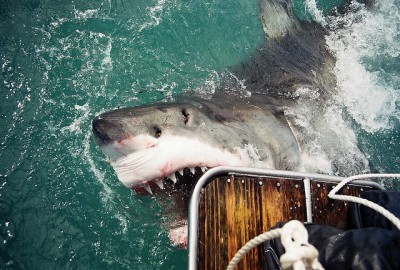 A rising trend in fatal shark attacks is pushing Australia to reconsider a proposal to begin culling sharks, but two questions that each credit a different cause in the rise of attacks must first be answered: first, is the great white shark population indeed rising thanks to the animals’ protected status? Or is more human activity putting sharks and humans closer than before?

Following the fatal mauling of 24-year-old surfer Benjamin Linden, many have called on officials to lift the shark’s protected status. But Dr. Bob Hueter, director of the Mote Marine Laboratory’s Center for Shark Research in Sarasota, Florida points out that there are many reasons that lead to increased attacks and that it doesn’t necessarily mean their population is rising.

“When you have multiple attacks, it can be one of two things or a combination of both. The most obvious is that there are more sharks there in a place where people frequent for some reason,” Dr. Hueter told BBC News.

Cape Cod, Massachusetts, the site of a recent shark sighting, has seen a greater amount of sharks close to shore because of conservation efforts for sharks’ prey, the seal.

Dr. Hueter warns that another factor leads a misguided appearance of more sharks in close contact with humans. He calls it the “concept of statistical clustering.”

“Because you get two events that seem to be close together in time and space, doesn’t mean you’ve got a trend,” Dr. Hueter said. “That’s what the media often doesn’t get, as soon as you get a couple of these together they’re talking on the evening news about an increase in this, or an increase in that. And that’s just not necessarily the case.”

Dr. John G. West, curator of the Australian Shark Attack File, said a rise in shark attacks does not necessarily mean a rise in shark population, but a rise in human activity over a larger area frequented by sharks.

He attributed the rise in Australian shark attacks to “an increasing human population, more people visiting beaches, a rise in the popularity of water-based fitness and recreational activities and people accessing previously isolated coastal areas.” Yet, fatalities from shark attacks remain low: on average 1.1 people were killed by sharks each year over the past 20 years, whereas there were 87 drownings per year on average.

Dr. West’s paper points to no evidence suggesting an increase in shark numbers.

Research suggesting that shark attacks are increasing because there are more people in the water over larger areas has prompted Dr. Hueter to say “removing the sharks has never been a solution in any of these cases. The better approach is to manage people’s behavior,” in regard to his opinion on culling sharks. People can take precautions such as not wearing shiny jewelry in the water that can be mistaken for the sheen of fish shoals, do not go swimming at dawn and dusk and avoid swimming at night since sharks can hardly distinguish between prey and a human in such low-lighting.

Following a fatal attack in March, State Premier Colin Barnett did not pass a culling program, but Fisheries Minister Norman Moore told Australia’s ABC Television that the agency must determine whether there has been a significant increase in shark population in fact. And if so, should they still remain on the protected list?

For further reading, check out BBC’s in-depth article pointing out that seemingly increased shark attacks may be because of increased media coverage where there was none before. The report contains other reasons why there is a perceived larger number of attacks.

View BBC coverage of the July 2012 attack, the fifth in less than a year, below.