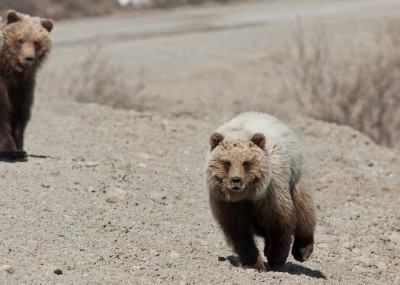 While the insect repellent Natrapel can’t go touting its anti-bear abilities just yet, it did come in handy for one hiker, her two nieces and her dog when they encountered a grizzly bear on a trail in Alaska. The spray was a decoy for the bear and a placebo for Alyson Jones-Robinson, an English Professor at the University of Alaska Fairbanks.

Jones-Robinson had camped on the Granite Tors Trail about 40 miles east of Fairbanks the day before with her two nieces, aged 13 and 9, who were visiting from Washington state. When Jones-Robinson, 43, came upon a young grizzly bear on the 15-mile trail in the Chena River State Recreation Area last Thursday, she was doing her best in panic mode to save her nieces and her husky, Rowyn.

“It was a very surreal experience,” Jones-Robinson told the Fairbanks Daily News-Miner the day after the encounter. “All I could think about was this bear is so close to me I can see its teeth. I could have kissed it. I wished I had a gun.”

Eyeing the bear, she estimated that it was about 5 feet, 5 inches and that it came up to her chest. The bear was acting aggressively, bluff-charging, circling the huddled group of scared hikers and occasionally taking snaps at the dog who couldn’t resist fighting back.

“It was terrifying. On a scale of 1 to 10, it was above a 10. My adrenaline was going so fast all I could think of was getting the kids and dog to safety,” she told the Fairbanks Daily. “I told the girls if the bear attacked me to take the dog and don’t look back, to get off the mountain and go until they found somebody.”

Following one of the bear’s bluff-charges, Jones-Robinson deployed a can of bear spray when the bear was four feet away. “Then I fell with my pack on and dropped the bear spray,” she said.

The bear momentarily retreated then came back to circle her again. So she defended herself with whatever she had and threw a pack of macaroni and cheese at it. Then her nieces called out that there was another bear. “As it circled around me, I heard the girls yell, ‘There’s another one. There’s another bear up here,'” Jones-Robinson said.

She never saw the bear, but instructed the girls to thrown down their packs where they were and to come to her. In the dog’s pack was a bottle of Natrapel, a DEET-free insect repellent that she held out in front of her like the can of bear spray, threatening to spray the bear should he come close.

In a chaotic scene, the bear snapped at the dog and the dog tried to attack back each time. She worked between holding the dog back, hitting the bear on the head three or four times with her walking stick and brandishing her bottle of Natrapel in front of her.

Just minutes into the ordeal, the bear retreated and the hikers walked backward to the trailhead without their packs, with the bear in view the whole time, Jones-Robinson brandishing her insect repellent and walking stick.

Just like jaws following a swimmer sinisterly in the water, the jaws of the woods came after them on the trail. It circled and bluff-charged as Jones-Robinson tried to predict charges to hold up her walking stick in defense.

Eventually they made it off the mountain and the bear sauntered off, but the crew was exhausted by that point. She only sprayed the bear with Natrapel once, but said it didn’t have any effect on the bear. She said her nieces were troopers who struck poses to make themselves look bigger to the bear, even though they were crying the whole time.

The Friday after the attack, Jones-Robinson went out and bought a gun.