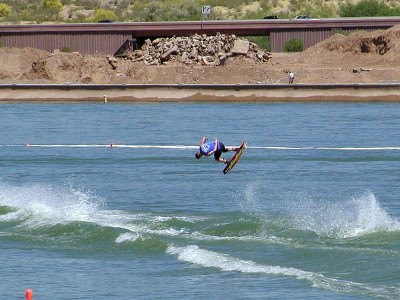 In hopes of bringing more attention to the sport of wakeboarding, acclaimed wakeboarder Phillip Soven has signed on to star in the MTV reality show Wake Brothers.

Set to debut on July 25, the show features the 23-year-old, who has won myriad titles including two world titles. Also starring is Soven’s brother and fellow professional wakeboarder, Bob.

In an interview with USA Today, Phillip said, “Our hope is that it will promote the sport and bring some mainstream attention. It’s the action sports lifestyle and a lighthearted comedy with some ups and downs.”

The show’s aim is to bring crowds closer to the sport. Since wakeboarding requires expensive towboats and an expansive body of still water, it has been difficult to showcase the sport’s extraordinary and exciting tricks—until now.

Using a new cable system, organizers of the sport now have a means to do just that. The new system can take boarders through a narrow obstacle course and back again in the span of 300 feet, allowing boarders to make do with much smaller bodies of water.

Parks Bonifay, a veteran pro of wakeboarding told USA Today, “The new cable system makes wakeboarding way more accessible. From a pro standpoint, it brings a different aspect to the sport and allows us to have new lines, do bigger tricks and bring a level of originality that you otherwise wouldn’t see.”