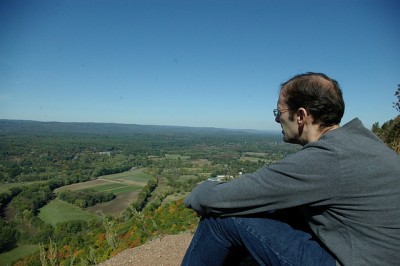 A recreationist sits at the Overlook on Talcott Mountain in Hartford, Connecticut

While hikers are out having a peaceful stroll through refreshing countryside on a popular Connecticut trail, thieves are taking advantage of the remote area to collect a few valuable belongings from the hiker’s parked cars.

Several hikers parked near the trail head at Talcott Mountain State Park in Bloomfield have had their cars broken into. They came back to discover their car windows smashed in and their GPS, camcorders, credit cards and other valuables missing. One witness reported another victim, a mother, crying hysterically over a stolen camcorder with footage of her newborn’s birth, something she will never be able to recover.

Police do patrol the area, but it is impossible for them to be there at all times. The best they can do is to encourage visitors not to make themselves an easy target by either leaving valuables at home, or at least out of sight in their cars.

At the time of publication, the thieves are still at large. Anyone with information is encouraged to call the Connecticut Department of Energy and Environmental Protection or local police.

NBC Connecticut shows footage of some of the break-ins and an interview with one of the victims.

Image from Andrew Ciscel on the flickr Creative Commons