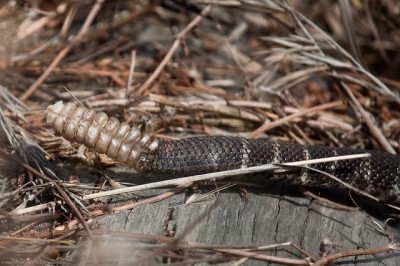 A rise in the number of rattlesnake bites in California leads experts to believe the snake population in the wild is increasing. Hikers continue to go out to enjoy the summer sun in many of the snake-populated areas getting dangerously close to the venomous snake.

Hiker Morgan MacKay told KTVU in California that he has seen snakes right off the trail this year.

“I’ve actually seen one up on Briones [Regional Park], yeah. It was a rattlesnake,” said MacKay to KTVU. “It actually scared my friend. It jumped out at him.”

According to Mercury News, rattlesnake bites were up 48 percent this spring and only half way through the bite season, numbers are approaching record-high status. Between April and June, 184 rattler bites were reported to the state’s Poison Control Center. During the same time period last year, there were 124.

Executive Director for Poison Control Stuart Heard suggests that the weather and environment may play a role in the increase. He said a wet 2011 winter created good conditions for snake survival, while a drier-than-average winter may have dispersed their population across a larger area as they travel farther for food and water.

Both baby and adult rattlesnakes bite people and for most Californians, the unlucky encounter just comes from being in the wrong place at the wrong time. Seven-year-old Gianni Thomas was sitting on his back porch at his family’s ranch home south of Pittsburg. A baby rattlesnake less than 16 inches long bit him on his right foot and didn’t release until Gianni’s older brother William tore it away as it squirted venom over the patio.

Gianni’s leg swelled up and darkened. He became pale and hallucinatory in the car ride to the hospital, where he stayed four days.

“It was terrifying,” Tina Thomas, Gianni’s mother said to Mercury News. “It’s a risk on the ranch and, for that matter, for people who hike on trails in open land. You have to watch out and be careful.”

The family has noticed more rattlesnakes than any other year so far – at least 20 sightings so far.

Naturalists and public health experts suggest leaving rattlesnakes alone when encountered in the wild. Research has found that many rattlesnake bite victims that are bitten in the hand indicate people who either intentionally reached for the snake or reached into rocks, weeds, or brush without taking precaution.

Image from Mike Baird, mikebaird on the flickr Creative Commons