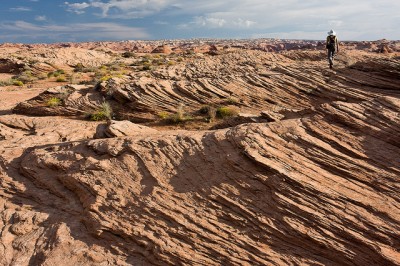 An anonymous hiker treks toward the Escalante River near Coyote Gulch in the southern Utah desert.

The last time William LaFever’s father heard from his son was on June 6 or 7 when he called to let his father know that his gear and money were stolen after he arrived in Boulder, Utah with his dog. The 28-year-old autistic man had hitchhiked to Utah in hopes of going into the desert based on a belief that he was American Indian. He had recently given up his Colorado Springs, Colorado apartment and most of his possessions to do so.

He had the equipment and food supplies needed to enter the desert, at the dissuasion of his family, but when it was stolen, LaFever’s father John LaFever told him to catch a ride to Page to collect money he would wire transfer there. Unbeknownst to John LaFever, his son decided instead to hike down the Escalante River and then hitch a boat ride along Lake Powell to Page, according to the sheriff’s department.

“He didn’t realize how arduous his journey would be,” John LaFever told The Associated Press. “We didn’t know what he was heading into, either. Thank God he’s alive.”

It is unknown exactly how long he spent in the desert as he likely began hiking within a few days of phoning his father. It is speculated that he spent between three weeks to a month in severe heat with no supplies. His family reported him missing last Monday, about one month after he last spoke to his father.

John LaFever said his son is an experienced mountaineer, having spent a lot of time backpacking in the Colorado Mountains, but Utah’s twisting, arid canyons and 100 degree days were a completely different challenge for him.

LaFever’s dog ran away some days into the journey (his fate is unknown) while LaFever continued the journey by foot with no food, no supplies and eventually no clothing. He dug up roots and ate river frogs to survive. He was about 50 miles into the journey when he was rescued.

Rescuers in a helicopter spotted LaFever Thursday, July 12 lying in the river wearing only his underwear. Utah Highway Patrol Pilot Shane Oldfield was the rescuer that spotted LaFever. He said the hiker was severely emaciated, weighing less than an estimated 100 pounds at six feet tall.

“He was in the right spot when the helicopter flew overhead. If he was under a tree they wouldn’t have seen him,” John LaFever said. “He wasn’t able to walk, he was so weak. He was barely able to get an arm up to wave to the helicopter. When they landed, he just wanted to talk to somebody. He’s going to recover from this.”

Deputy Ray Gardner was aboard the helicopter assisting in the rescue. His recent training in search and rescue operations taught him that autistic people are typically attracted to water, therefore rescuers were flying along the river during their search.

When found, rescuers said his mental condition made him look at his situation much differently than anyone else being rescued: much more positively. He wasn’t in any hurry to be rescued, he just wanted to talk when rescuers arrived. Oldfield even described his initial hesitation to get into the helicopter as “borderline belligerent.”

LaFever asked for 15 to 20 minutes to just sit there while rescuers pleaded to get him into the helicopter to the hospital. They met him half way and gave LaFever eight minutes to drink Gatorade and eat a granola bar before they took flight. LaFever took the time to speak about his experiences. He recalled eating a frog the day before and said that he didn’t want to do it again because it didn’t sit well in his stomach.

Deputy Gardner surmises that LaFever would not have lived another 24 hours. LaFever is now being treated for starvation and dehydration at Dixie Regional Medical Center in St. George.

Image from Greg Willis, gregw66 on the flickr Creative Commons