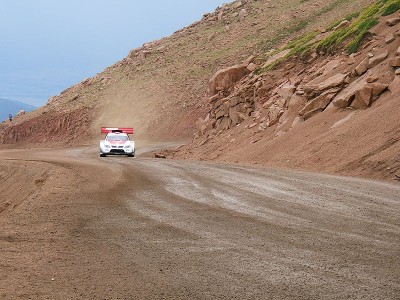 This year is the 90th anniversary of the Pikes Peak International Hill Climb, a car and motorcycle race up to the summit of Pikes Peak, Colorado which bills itself as the “second oldest motor sports race in America”.

This year also marks the first time it  has been officially postponed due to the dangerous wildfires raging in the area. The race organizers met with U.S. Forest Service officials yesterday to determine whether or not the race and its associated events could be run during its scheduled dates (July 3-8).

The race organizers and U.S. Forest Service officials decided to indefinably postpone the race due to the fires. The main concern from the U.S. Forest Service was not that the fire would pose a hazard to the race, but rather that the race would divert valuable resources away from the firefighting effort. At the moment race officials believe the Pikes Peak International Hill Climb will be rescheduled some time in the next two weeks, but there is no set date at this time. Read the press release below for more details.

Faced with epic conditions and safety concerns related to the wildfires threatening Colorado Springs and nearby communities, the 90th Pikes Peak International Hill Climb, scheduled for Sunday, July 8, is being postponed until later in the summer.

“We have been informed by the U.S. Forest Service that conditions are so extreme, along with the inability to forecast the future of the fire, and with access to Pikes Peak in jeopardy that the agency can’t permit the event to go as scheduled, “said Tom Osborne, Chairman of the Board of the PPIHC and President & CEO of the Colorado Springs Sports Corporation.

Osborne said that the iconic event, the nation’s second-oldest motor sports race behind the Indianapolis 500, will be staged later this summer, and that a new date will be set within a time frame that allows the option of rescheduling of a new Race Week for drivers, racers, support crews and the multitude of agencies that are required to support the race.

“This race began in 1916 and it has earned its place among the world’s greatest motor sports events, and it is an important part of the sports heritage of Colorado Springs and the Pikes Peak Region,” said Colorado Springs Mayor Steve Bach. “We are committed to making sure it takes place this year and that we carry on the tradition. We are disappointed, but our first concern is our city, its residents, their homes, businesses and public safety.”

Sports Corp and PPIHC officials met with officials from the Forest Service and numerous agencies tasked with the safety and support of the race this afternoon that included a wide-ranging discussion and review of the possibility of staging the race on July 8, along with the numerous ancillary events that go with the event. Those include the arrivals of the 211 race crews and competitors starting this weekend, the Technical Inspections on July 3 at the Pikes Peak International Raceway, the July 6 Fan Fest downtown, and practice and qualification times for all competitors on July 4-5-6.

“At the end of our meeting today, it was clear that we would not be able to go as scheduled,” said Osborne. “Our deepest concern is for the safety of the public and the competitors, and it was obvious that several agencies charged with public safety would not be able to commit the resources and manpower required to ensure those requirements because of the critical need for their resources at this time. Our city is in an unprecedented struggle right now and we are deeply sensitive to it.”

The race organizers will meet quickly to begin the search for the new date and it is a goal to announce the replacement date within two weeks.

Notification of the 211 competitors, some of them from 15 nations outside the United States, news media organizations traveling to cover the race, and fans has begun.

Tickets already purchased will be honored for the new date and the events for the fans and competitors will be rescheduled. All sponsor, vendor and supplier agreements will be fulfilled, according to Osborne.

Image from Danyak501 at the English language Wikipedia