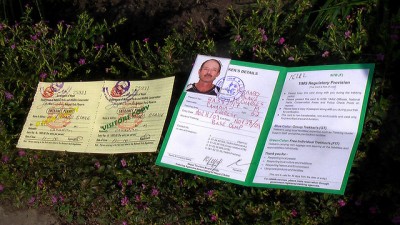 Speculation still shrouds a violent incident that took place on Mount Everest last month. On May 22, an unnamed Chinese mountaineer drew the attention of other Everest climbers when he camped some distance away from two other Chinese expeditions on the mountain.

Just a few thousand feet from the summit, a group of Tibet Mountaineering Guide School (TMGS) graduates acted on suspicion that the Chinese climber might be permitless. When the Tibetan guides approached and it was discovered the Chinese climber did not have a permit, the graduates, who were working as rope fixers, reportedly subdued the climber when he brandished his ice axe as a weapon, according to Outside Magazine.

It was disgraceful. They literally kicked him down the ropes. It was a disgusting example of a pack of bullies egging each other on and literally beating him down the hill. It was absolutely unnecessary as he was offering no resistance and was scared out of his mind. The Tibetans should, and could, have just escorted him down the hill and let the authorities deal with him.

Kari Kobler, a Swiss guide and proprietor of Kobler & Partner also witnessed the event. He filmed the brutal scene, but did not make the footage public. He described the footage as the man being escorted down the mountain “like a rucksack with an oxygen tank, but actually it is a human being.” Kobler is worried that the footage might escalate already tense relations between the Tibetans and the Chinese, giving the Chinese a reason to further restrict Tibetan freedom. He recorded the footage to provide proof in case people denied the incident ever having taken place.

Tibet has officially been a part of the People’s Republic of China for over fifty years now. Some see the sovereignty of the Beijing government over Tibetan affairs as an illegitimate occupation, and tensions have existed between Chinese and Tibetans ever since.

A permit to ascend Mount Everest varies in price depending the number of people in a climbing party. For a solo trek, the cost is approximately $25,000. For an expedition, it can cost $70,000 for a group of seven climbers, or $10,000 a person.

A prospective climber can attain a permit to climb Everest from either the Chinese or Nepalese government. For persons who attempt the ascent from the southern (Nepalese) approach, the cost of the permit is paid to the Nepalese government and covers the following:

Kobler’s video of the beating and escort down the mountain was shown to Hans Schallenerger, Swiss-born head of Chinese mountain gear maker, Ozark, which is a main sponsor of TMGS. Together, they decided to handle the incident internally in order to not involve authorities that may overreact in that situation. It was used to teach the graduates how to handle this kind of situation in the future.

Image from Rick McCharles on the flickr Creative Commons