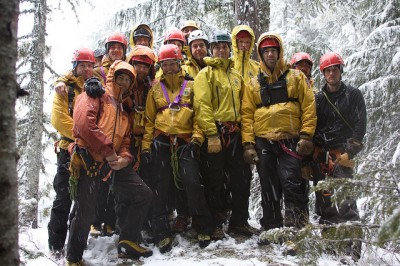 Mount Rainier's climbing ranger team pauses during Rope Rescue Training near Christine Falls on May 4, 2012. Ranger Nick Hall is on the far left.

In a tragic accident during a rescue operation, 34 year old climbing ranger Nick Hall fell about 3,700 feet to his death Thursday afternoon while helping two climbers out of a crevasse on Mount Rainier. It is the second on-duty ranger death on Mount Rainier this year.

A party of four climbers from Waco, Texas (two men and two women) called for emergency rescue when the two women fell into a crevasse. They were returning from a successful summit when they slipped at the 13,700 foot level of the Emmons Glacier.

A few hundred pounds of force yanking on the harnesses of the climbers left all of them with non-life threatening injuries, according to park Spokesman Kevin Bacher. One of the male climbers was able to phone for rescue with his cell phone around 1:45PM Thursday afternoon.

Rescue personnel arrived relatively quickly and had pulled out the two climbers from the crevasse by 3:10PM As the first of the climbers was being evacuated by helicopter at 4:59PM, Hall fell and slid more than 3,000 feet from the 13,700 level on the mountain’s northeast side.

He did not respond to attempts to contact him and he was not moving. Rescue operations were complicated due to high winds and a rapidly lowering cloud ceiling. With the help of Chinook helicopters from Joint Base Lewis-McChord, three members of the original climbing party were lifted off the mountain by 9:00PM and taken to Madigan Hospital.

Several hours after the incident began, rescuers reached Hall and found him deceased. Next of kin had been notified before news of his death was released. Hall was a four year veteran of Mount Rainier National Park’s climbing program. A resident of Patten, Maine, he was unmarried and had no children.

This follows a ranger death almost seven months earlier when ranger Margaret Anderson was fatally shot on New Year’s Day while trying to stop a man who drove through a tire-chain checkpoint near Longmire. The shooter, Benjamin Colton Barnes, 24, was suspected in a shooting in Seattle. Authorities later found his body the next day about a mile from the checkpoint.