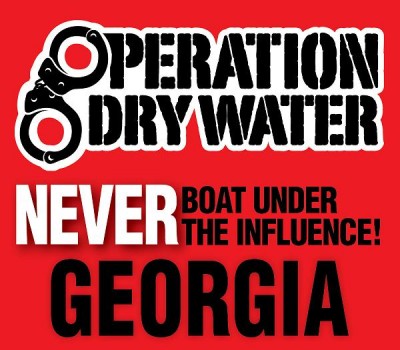 This weekend, marine law enforcement officers here in Georgia and nationwide will be on patrol during Operation Dry Water (ODW), an annual campaign focused on enforcement of BUI laws and educating all boaters about the risks of operating a boat under the influence of alcohol and/or drugs. Operation Dry Water 2012 will be held June 22-24, according to the Georgia Department of Natural Resources, Wildlife Resources Division (WRD).

Lt. Col. Jeff Weaver, WRD law enforcement, warns, “Alcohol can impair a boater’s judgment, balance, vision and reaction time. Combined with the sun, wind, noise and motion of a boat and the fact that boating is not an activity you do every day, you can quickly run into a dangerous situation.”

Despite the fact that it is against the law nationwide for a person to operate a recreational vessel with an unlawful blood alcohol concentration (.10 or higher in Georgia), BUI continues to be a problem not only in Georgia, but in the U.S. and accounts nationwide for a disproportional number of on the water deaths. Alcohol was a contributing factor in just 6 percent of boating accidents overall, but figured in 16 percent of boating fatalities nationwide.

Conservation rangers have made 63 arrests so far this year on state lakes and waterways, and a total of 168 in 2011.

Operation Dry Water, a multi-agency, education and enforcement initiative launched by the National Association of State Boating Law Administrators (NASBLA) in 2009 in partnership with the U.S. Coast Guard, puts thousands of local, state and federal marine law enforcement officers on the water just before the Fourth of July to give BUI enforcement high visibility before a holiday known for drinking and boating – and deadly accidents.

“We want boaters to know the risks of drinking and boating,” says John Fetterman, law enforcement director for NASBLA and national spokesperson for Operation Dry Water. “These are needless deaths in a recreational activity that is safe and enjoyable when people stay alert and follow the rules.”

Officers from all 56 U.S. states, trusts and territories are expected to participate in Operation Dry Water 2012, educating the public and being on the lookout for boat operators whose blood alcohol concentration exceeds their state’s limit.

Logo courtesy of the Georgia Department of Natural Resources