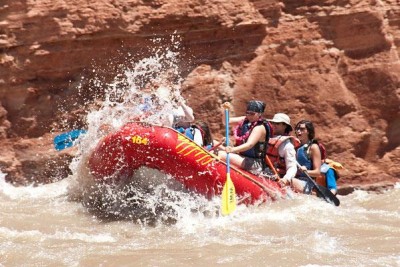 Twelve months after one of the highest water years in recent memory on Utah’s Colorado and Green rivers, the story has changed. This year’s record-low run off is prompting concerns by some river outfitters for a soft rafting season.

However, Western River Expeditions http://www.westernriver.com plans to have just as much fun (and business) as ever and advises river rafters not to cancel or delay their river enjoyment another year.

According to Western River Expeditions, low water has its advantages! For starters, low flows can, in some instances, actually create bigger rapids than in high water periods which can actually swallow up the rapids for a fast, but less exciting ride. Plus the water is warmer.

Some weeks ago Western River Expeditions began adapting river trips and equipment to take full advantage of the increased fun and positives of this low-water year. The company is using smaller boats and more paddle rafts instead of larger row and motorized craft. Also, they’re utilizing to more inflatable kayaks and (new for this year) stand up paddleboards.

“For those who equate excitement and fun only with high water – we’re here to say that’s just wrong,” says Brian Merrill, CEO of Western River Expeditions.

Because camping is intrinsic to the company’s formula for river fun, Merrill explained that camps and beaches are better at low water. “They are bigger and more numerous.” He noted that day trips in Moab, Utah are up 15 percent over last year, which was a record high-water year.

Following is a conversation with Merrill on how the company is adapting this season to specific rafting courses:

Westwater Canyon– At higher water levels, we use primarily 18ft row boats where the guide does all the rowing and the guests hold on.  In lower water, we operate mostly paddle boats where each of the guests gets a paddle, the guides give commands and everyone participates in getting down the river.  The boats are smaller (16 ft), and the diameter of the tubes is smaller so it is a much splashier ride.  The participatory nature of a paddle boat also really adds to the excitement of going through rapids. See: http://www.westernriver.com/trips/westwater1day/

The rapids in Westwater flush over and flatten out in higher water, so everyone prefers to raft there when the water is low.  The rapids are fun and the canyon takes on an entirely different look.  It’s like you are going through a series of chutes and slides and there is plenty of time to enjoy the unique scenery and beauty that often gets overlooked in higher water.

Cataract Canyon– In Cataract, we will not be running the large J-Rig rafts this year.  Instead, we are using 18ft. rowing rigs and 16ft. paddle boats.  Even with low water, the rapids in Cataract Canyon are significant, especially when using the size of boats we are using.  This is more “high adventure” but not too crazy.  People always come back raving about paddling Cataract Canyon (something that’s not offered every year). See: http://www.westernriver.com/trips/cataract/

Desolation Canyon– We haven’t really changed the boat configuration for this trip, but the best thing about low water in Desolation is much bigger and more plentiful camps.  The water gets incredibly warm and many of the guests would swim all day if they could.  Another bonus is that the mosquitoes are significantly reduced when the water is low. See:  http://www.westernriver.com/trips/green/

Day trips out of Moab, Utah– We always run paddle boats on this stretch of river, but with low-water, we feel comfortable encouraging more use of inflatable kayaks. In an inflatable kayak, you paddle yourself down the river while supervised by a guide.  You are close to the water and even small waves are a lot of fun.  Inflatable kayaks are much more stable than hard-shell kayaks and can be enjoyed by all age groups. See: http://www.westernriver.com/trips/oneday/

Stand Up Paddleboard Tours– These are our brand new offering this year, and the timing couldn’t be better.  Stand up paddleboards are a large surfboard that you stand on and control with a really long paddle.  The boards we use are very stable and are designed for novice to intermediate paddlers.  This trip is operated on very mild stretches of the Colorado River.  The low water gives us the flexibility to play with the boards on several different reaches outside of the Moab area.  Stand up paddleboarding is one of the fastest growing sports in the country, and the Colorado River near Moab is one of the most scenic places in the world to try it out.
See: http://www.moabadventurecenter.com/trips/moab-stand-up-paddle-board-tours/