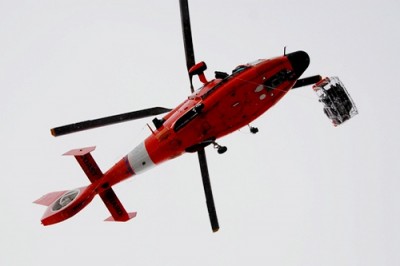 On June 11, the U.S. Coast Guard received a phony distress call from a yacht that supposedly blew up off the coast of New Jersey. That call was one of the costliest hoaxes in U.S. Coast Guard history.

Yesterday, the Coast Guard has released a statement saying June’s hoax may be linked to a similar hoax that came in off the coast of Texas on May 20.

Authorities said that both callers used the same terminology, which included non-standard nautical phrases. For example, the callers said “taking on water” instead of “sinking.” Both times “people” were referred to as “souls,” and “beacon” was used to describe a supposed automatic signaling device on life rafts.

In typical distress calls, callers ask for the general Coast Guard or dial into a known emergency frequency. But in both cases, the callers specifically contacted a Coast Guard Vessel Traffic Service and said their GPS wasn’t working.

In both cases the callers seemed to call from land and gave specific locations of distress and distances, although they exhibited unfamiliarity with the area and referenced locations in a way that a boat captain wouldn’t use.

The Coast Guard continues to investigate the situation and is offering a $3,000 reward for information leading to the arrest and prosecution of the person responsible for making the fake distress call. Anyone with information regarding this probable hoax is encouraged to anonymously contact CGIS at 212-668-7048 or 646-872-5774.

Audio from the suspected hoax distress call from the Texas incident can be found here.

Helicopters, rescue boats, a fleet of rescue workers and state fire and police departments searched for the non-existent boat of the June 11 hoax, costing more than $318,000 to do so. After five and a half hours of searching a 638-square nautical mile area, the search was called off. The caller had supplied the Coast Guard with a specific location of the boat. Yet, the agency never came upon any smoke, no floating yacht parts, nor any life rafts. The situation was deemed a hoax.

Below is video of the statement by a U.S. Coast Guard spokesperson. He says the calls are not undeniably tied, but that there are striking similarities. He goes further in depth to describe how the calls were similar.