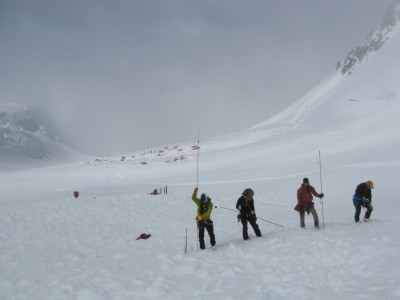 A two-day ground search of the debris path from a fatal avalanche on Mt. McKinley has been suspended after clues were found confirming the likely location of four deceased climbers.  Mr. Yoshiaki Kato, Ms. Masako Suda, Ms. Michiko Suzuki, and Mr. Tamao Suzuki of the Miyagi Workers Alpine Federation (MWAF) expedition are presumed to havedied in the avalanche, while one team member, Mr. Hitoshi Ogi, survived the event with a minor hand injury.

The fatal avalanche happened at approximately 11,800-feet on the West Buttress, and was originally believed to have occurred early morning June 14.  However NPS rangers have since confirmed with both Ogi and multiple teams on the mountain that the slide occurred during the early morning hours of Wednesday, June 13.  Ogi first reported the event to NPS rangers when he arrived at the Kahiltna Basecamp the afternoon of June 14.

An aerial hasty search took place on June 14 followed by an initial four-member NPS ground search the following day.  On Saturday, June 16, an expanded 10-person ground crew consisting of NPS rangers, volunteer patrol members, a dog handler, and a trained search and rescue dog probed and further investigated the debris zone.  During the search, NPS mountaineering ranger Tucker Chenoweth descended into the same crevasse that the survivor Hitoshi Ogi had fallen into during the avalanche.  While probing through the debris roughly 30 meters below the glacier surface, Chenoweth found a broken rope end that matched the MWAF team’s rope.  He began to dig further, but encountered heavily compacted ice and snowdebris.  Due to the danger of ice fall within the crevasse, it was decidedto permanently suspend the recovery efforts.

There have six climbing fatalities on Mt. McKinley this season.   Since 1932, a total of 120 climbers have perished on the mountain, 12 due to avalanches.  This week’s four avalanche fatalities were the first to occur on the popular West Buttress route.