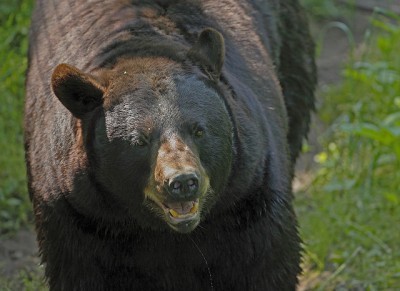 Image is not of the bear involved in the story.

The Department of Game and Fish was still trying to catch a black bear Thursday that ripped a camper’s tent and scratched a young girl in the Ponderosa Campground of Bandelier National Monument early Wednesday morning.

According to park rangers, the girl and her mother were awakened by a bear scratching on their tent. After the bear tore a small hole in the tent, scratching the girl, the two emerged with flashlights and scared the bear away. The mother, leader of a cub scout troop using the campground, took the troop to a nearby motel and treated the young girl’s injuries. They returned to the campground for their gear later Wednesday morning.

The National Monument closed the campground until further notice, and a Department conservation officer set a trap for the bear. If caught, it most likely will be killed as standard procedure when a bear exhibits aggressive behavior and causes a human injury.

Park rangers said the campers admitted to having some toothpaste and lip balm in their tent. Both items have been known to attract hungry bears. The Department recommends that campers never keep food or toiletry items in their tent while camping in bear country.

If you see a bear and consider it a safety threat, please contact your local Department of Game and Fish conservation officer, police or sheriff’s office. You also can call the Department office in Santa Fe at (505) 476-8000, or area offices in Albuquerque, Raton, Roswell and Las Cruces, from 8 a.m. to 5 p.m. Monday through Friday.

If you live or camp in bear country:

If you see a bear: