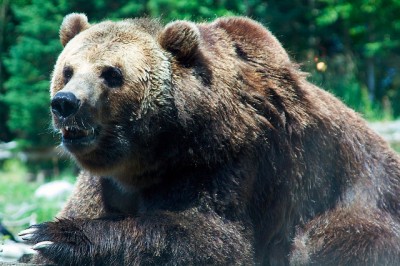 While not all bear and survival experts recommend attempting to escape an angry bear by climbing up a tree, the method worked out well enough for Ben Radakovich, 30, of Eagle River, Alaska. He was only three miles into his hike along an offshoot of the Bird Creek Trail south of Anchorage early on Sunday when he had to climb for his life.

He was hiking alone with a backpack and carrying bear spray. When he rounded one of the trail’s curves and encountered a bear cub and sow, everything happened so fast that he didn’t have time to deploy the spray. The cub was startled and ran away, while the sow stayed to attack Radakovich.

“It lunged at me,” Radakovich told ABC’s “Good Morning America.” “I flipped around and just laid on my stomach and curled up into a ball, and it was chewing on my lower back.”

He had a pair of ski poles that he used to fight off the bear and when there was a lull in the bear chewing on him. In the midst of an adrenaline rush, he sprinted toward a tree and scampered up desperately to the top, 30 feet above ground. From there he called 911 at 7:42 AM.

For a while, the bear remained on the scene, grunting in the brush below. At 9:20, rescuers arrived thanks to Radakovich’s excellent directions. His wounds were initially treated on the spot and he was subsequently airlifted to nearby Providence Alaska Medical Center.

He made it out alive with big wounds on his lower back, and puncture wounds, scrapes and bruises to his head, neck and back. Troopers who arrived on the scene said Radakovich was lucky that he had his backpack on, or it could have been worse.

Alaska wildlife officials plan to close the Bird Creek Trail for just a few days and the Penguin Creek Trail for possibly a week. Another bear was spotted on the trail, but it is not believed to be the same attacker.