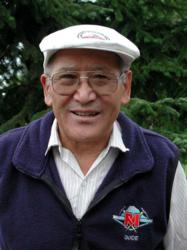 Hundreds of friends, family, fellow RMI Guides, and admirers of one of mountaineering’s pioneering Sherpa climbers gathered at Mt. Rainier’s Paradise Inn on Sunday, June 3rd to honor Nawang Gombu Sherpa. Gombu reached the summit of Mt. Everest on May 1, 1963 with Jim Whittaker, the first American to reach the top of Mt. Everest. In 1965, Gombu returned to Everest to become the first person to summit twice, a record he maintained for twenty years. He established a lasting friendship with Jim Whittaker and his family, coming to the United States to work with Whittaker’s twin brother, Lou, as a guide at Rainier Mountaineering, Inc in 1971 and worked their through the early 2003. Gombu was the longtime director of the Himalayan Mountaineering Institute and nephew to Tenzing Norgay. He was the youngest Sherpa on the successful 1953 British Mount Everest Expedition and was one of the last surviving climbing Sherpas of that heroic era. Gombu died in Darjeeling, India on April 24th, 2011.

The gathering on June 3rd included dozens of Mountaineering legends, such as Jim and Lou Whittaker, Larry Nielson, and Peter Whittaker. Many family members even journeyed from India to attend this tribute.  Gombu’s daughter, Yangdu, accepted a plaque from Mt. Rainier National Park Superintendent Randy King, recognizing her father’s years of service at Mt. Rainier. Many reflected on their friendships with Gombu. Famed mountain guide Dave Hahn recalls Gombu as “a profoundly humble man in an arena not known for fostering humility.” Jim Whittaker recounted a story when he and Gombu were on the summit of Mt. Everest in 1963:  He asked the soon-to-become-famous Sherpa what he was thinking; what was going through his mind in that historic moment; and received the succinct reply, “Getting down!”  Gombu “represented the highest ideal of a mountaineer.  As guide and climber, husband and father and very special friend, his memory will be kept alive in the high mountains,” recalls RMI Guide & Owner Joe Horiskey.

The event included a silent auction to raise money for the Sherpa Buddhist Association in Darjeeling, India where Gombu was president for many years. Special thanks to Ingrid & Lou Whittaker for organizing and promoting the event.