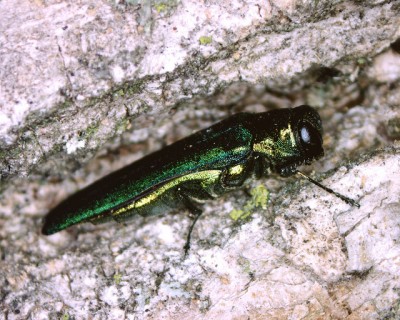 The emerald ash borer, an invasive insect from Asia. It has infested approximately 130,000 square miles - or 7 percent of native North American ash tree range - since it was first detected in Michigan in 2002.

The emerald ash borer, an invasive beetle that has already devastated millions of trees in Michigan since 2002, has now been confirmed to be present in the Great Smoky Mountains National Park of North Carolina and Tennessee.

Following routine inspections of traps last week, the beetle’s presence was detected within Tennessee state lines near the Sugarlands Visitor Center and in the Greenbrier area. The beetle was sent to the U.S. Department of Agriculture entomologist for confirmation.

Traps for the beetle have been set since 2008 as part of an effort to stop its spread by the U.S. Department of Agriculture’s Animal and Plant Health Inspection Service (APHIS). The park was considered to be at high risk of new infestation because of the high volume of visitors from infected areas.

The 1/2-inch-long emerald ash borer devastates trees by laying eggs in ash tree’s crevices. When the larvae hatch, they burrow under the bark and create feeding tunnels that make it impossible for trees to translocate nutrients and fluids. Eventually, an infected tree starves and dies. An indicator that an emerald ash borer has infested a tree is the presence of a D-shaped hole in the bark, or in advanced cases, a whole network of tunnels.

Infestation of new areas results from transportation of infested logs and firewood from area to area. At this time, a park-wide ban is in effect for any firewood originating from a quarantined location. Find a list of all quarantined areas on the National Park Service’s website.

View the video from WXOW 19 to see how some homeowners in Minnesota are protecting their ash trees from becoming infected.